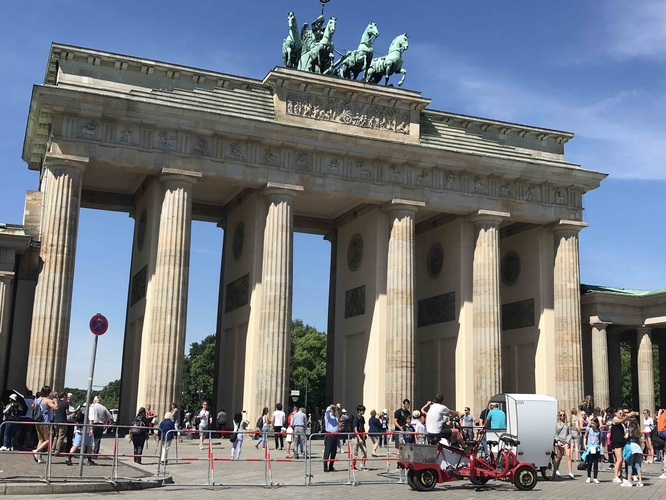 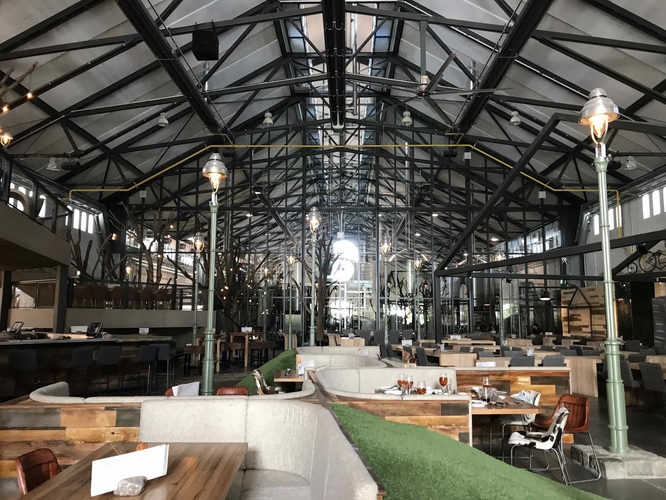 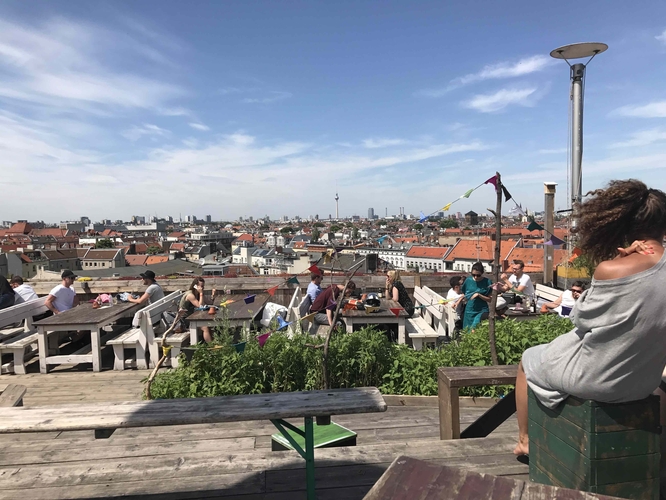 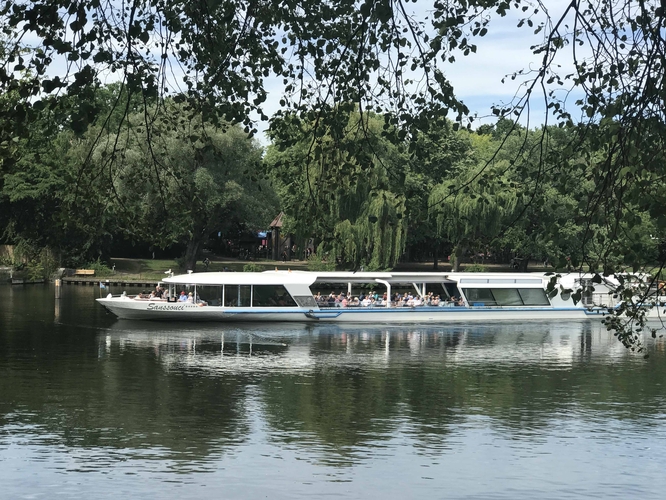 The capital of currywurst and doner kebabs has more to offer, says Neil Sowerby

IT was a bitter January. I always call it my pea soup month. Each evening after work at Berlin’s Bilka supermarket I stood shivering at the Imbiss at Zoo Station to eat my thick Erbsensuppe – mushy pea puree by any other name.

At weekends I treated myself to a sausage in it. I was the ultimate, penniless student in my puckering mock leather greatcoat and threadbare loon pants. The only thing I had in abundance was hair.

Finally, come February I got paid and was able to vary my diet to Currywurst with potato salad and even get to see some of the amazing city, an island of Capitalism stranded in the middle of Red East Germany – remaining so until the Wall came down in 1989 and Deutschland was reunified.

There’s no escaping the huge burden of history borne by Berlin – the legacy of Nazism, Communism and the city’s perennial brand of Hedonism,

Back in the city again in 2017 and Currywurst is now as much a Berlin icon as David Bowie, but pea soup has bitten the dust in favour of burgers and, of course, the doner  kebab, created in the city by Turkish immigrant Kadir Nurman in the early Seventies (as with Bowie, we never met). 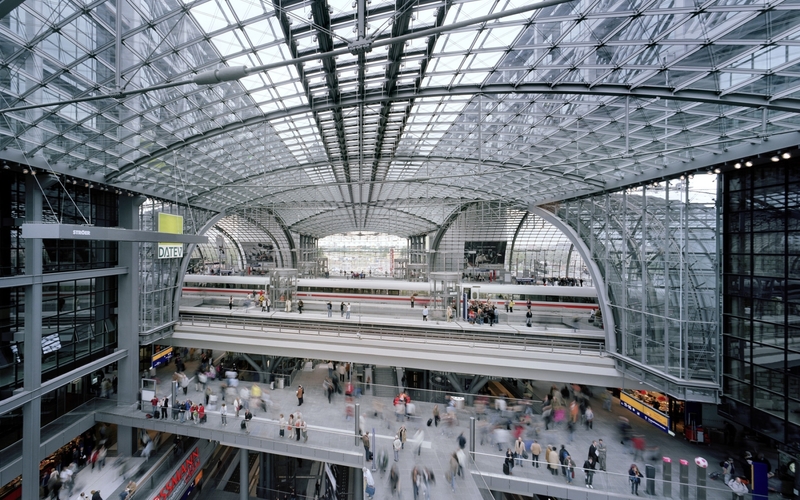 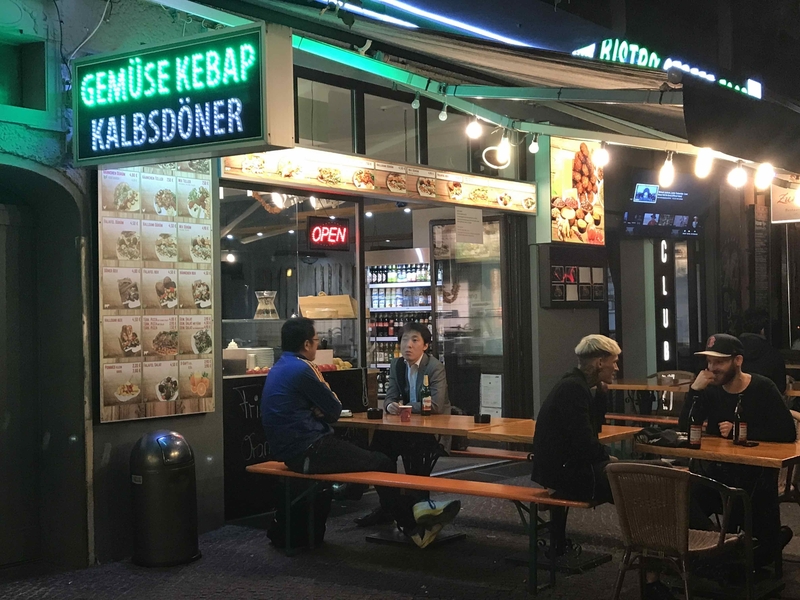 It’s a city utterly changed, obviously for the better, the axis for citizen and tourist alike shifting back to the original centre in East Berlin. There the Prussians built vast museums and monuments to their warrior culture, but I suspect the urban cool hang-outs in districts such as Prenzlauer Berg, Kreuzberg, Neukölln and even raw Friedrichshain are more the magnet for today’s weekenders.

Still there’s no escaping the huge burden of history borne by Berlin – the legacy of Nazism, Communism and the city’s perennial brand of Hedonism, all to come to terms with. It  makes for a thought-provoking cocktail of impressions.

Where to start? For me it was on top of a car park in Neukölln. Klunkerkranich is a place to get your bearings, but first be prepared to negotiate five floors of shopping mall and a couple of concrete ramps. Your reward a ramshackle boho bar (no food), a sun trap with a wonderful view across the city.

Two Weissbiers later and I felt like a native, though these were cloudy, refreshing Bavarian wheat beers; the real native Berliner Weisse is rather tart, neutral stuff perked up with a Schusse (shot) of raspberry or (shockingly green) woodruff syrup. Like Currywurst, really just a one-off must. 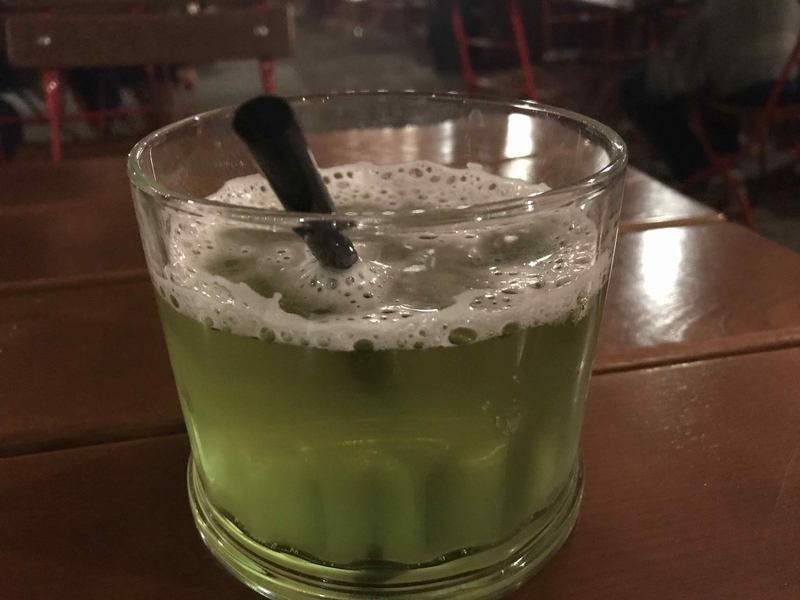 For old times’ sake, I drank one in the Prater on Kastanienallee, a true old-fashioned, tree-shaded beer garden, surviving up among the baristas and sushi meisters of hip Prenzlauerberg. Beerwise it’s a world away but with an eerily similar vibe to Stone Brewing Berlin in the city’s southern suburbs, European outpost of the Californian craft beer giants. This vast drinking hall and state of the art brewery set in a historic brick gasworks complex, is well worth the S-bahn rail trek out.

The food’s there’s fine too, my octopus and shrimp ceviche an antidote to the Teutonic stodge of yore, but  if you fancy Schweinebraten, dumplings and the like there’s always the Alexanderplatz branch of Munich’s famous Hofbräuhaus in the shadow of that much-loved GDR era relic, the Fernsehturm (telly tower). You can sip suitably retro cocktails in the panoramic bar 365 metres above the ground and imagine the Stasi are stalking you. 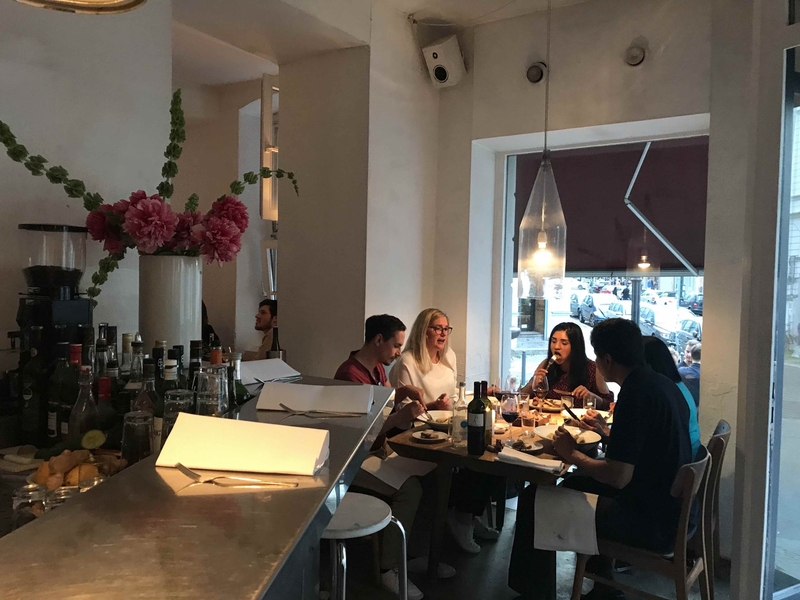 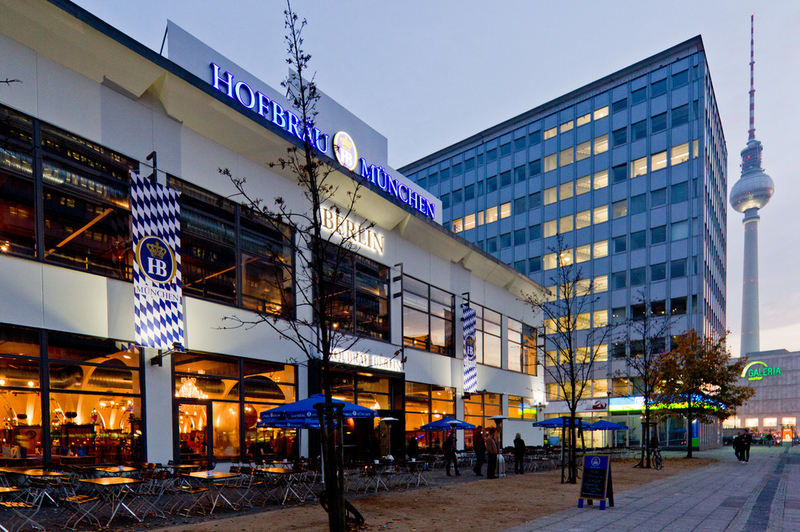 The tower is in Mitte, catch-all designation for the city’s core, which I kept gravitating back to (but not Alexanderplatz itself, concrete ‘dead’ centre). Much more human in scale and with better shopping, the Hackesche Höfe is a series of eight inter-connected Art Nouveau courtyards with elaborate ceramic facades off Rosenthalerstrasse, mixing shops, bars, theatre and creative studios. Neglected during the GDR era, it symbolises the rebirth of the whole Mitte, where thoroughfares such as Torstrasse, Linienstrasse, Tucholskystrasse and Auguststrasse are packed with interesting indie restaurants and bars.

The latter offers the contrasting venues of Pauly Saal, a swanky cocktail bar with a lovely courtyard and Clärchens Ballhaus, an old school ‘Tanzlokal’ and beer garden where you can, as it says on the label, foxtrot the night away.

On Torstrasse itself, I’d recommend tiny Noto, with its laid-back contemporary take on German food, but even better in the same vein on Linienstrasse, Das Lokal, where an old corner Kneipe (bar) has been transformed into one of the best affordable, casual dining spots in the city. They squeezed me in at the bar and I munched on a blanquette of rose veal and drank a limpid Rheinpfalz Pinot Noir. Then I went back another night for venison.

Even more casual was Berlin’s take on street food, at Birgit and Bier, a hippyish beer garden, jut south of the River Spree, that makes Klunkerkranich look smooth. I like this Turkish cafe heavy corner of Kreuzberg, where the spirit of alternative Berlin lingers on. Promenade along the river westwards beyond Schlesisches Tor and you’ll find wonderful street markets. 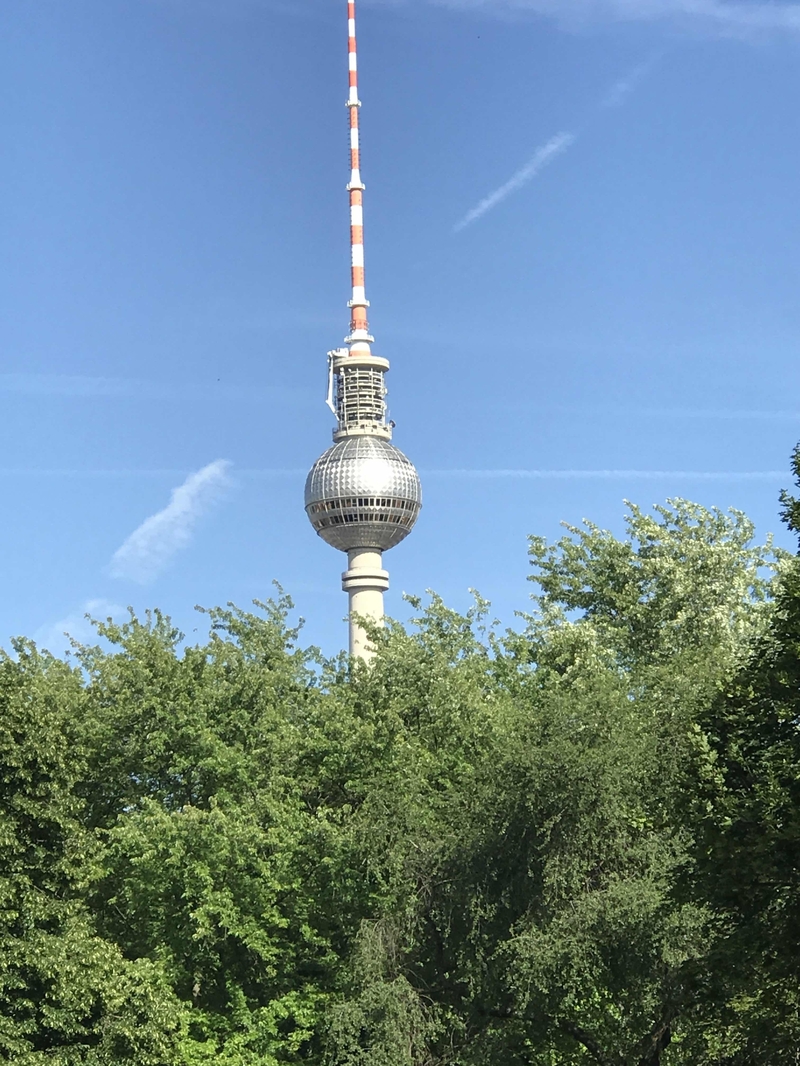 By all means visit the big sights, the Brandenburg Gate, Reichstag, Checkpoint Charlie but weekends away should also be about this kind of aimless sauntering, keeping your eyes open. The Germans have a verb for it: to ‘Bummel’. So, if you’re in the Tiergarten, Berlin’s equivalent of central Park complete with an obligatory nude sunbathing patch, grab a beer and pizza and hire a boat at the lakeside Cafe am Neuen See or step in off the wide, breezy space that is Warschauerstrasse and enjoy the achingly cool public space of the Michelberger Hotel in the company of one of Berlin’s new wave craft beers from Brewbaker.

And for the ultimate drift through this fascinating metropolis let the stern take the strain – go on a river cruise. Boarding near the medieval Marienkirche, famous for its ethereal ‘Dance of Death’ fresco, I took the basic 23 euros one hour tour from Stern & Kreis. We glided serenely past the bombastic hulk of the Cathedral, the monumental Museum Island and on to the modern riverside resurgence beyond the Reichstag. It would give a fascinating over-view for a first time visitor. Oh yes, and there is a Himmel, they serve beer on board.

There’s so much to see, don’t try to cram too much into your stay. I’m saving sunbathing out at the Wannsee lake and a visit to the Stasi (East German secret police) Museum until next time. Here, though, are a few musts…

Between the Brandenburg Gate and Potsdamer Platz, its design is inspired by Prague’s amazing Jewish Graveyard with its dense, cluttered gravestones. Here in Berlin 2,700 square, dark grey pillars of varying heights are scattered across the site. In the middle of the engulfing maze I was overcome by an immense feeling of isolation and despair, which is the appropriate response to a space designed to commemorate the exterminated Jews of Europe. 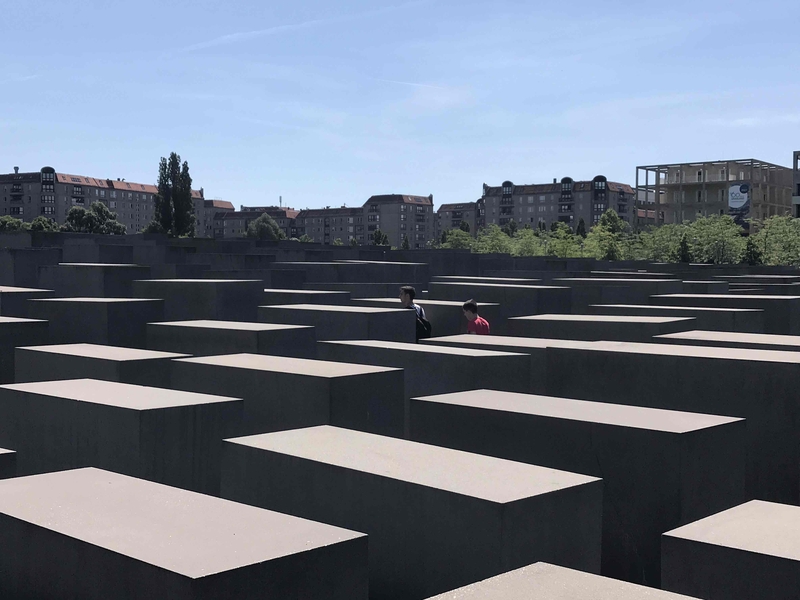 Similarly making  a statement about the history of a persecuted race, this Daniel Libeskind building in Kreuzberg bears obvious resemblances to his later project, the Imperial War Museum North. Step back from its zinc facade and the great zigzag slashes rearrange themselves into a dislocated Star of David. Three long, intersecting corridors – ‘axes’ of exile, holocaust and continuity – showcase small artefacts, mementos, testimonies, but the centrepiece is the Holocaust Tower. This is a vertiginous, walled void, completely dark but for a small slit high up, allowing light and noises from outside. Small batches of visitors are filtered in at a time and the huge door swings behind you. Flesh-creeping. On the central site of the Gestapo and SS HQs, this exhibition space offers a comprehensive account of the rise of Nazism. Outside, set against a remaining fragment of the Berlin Wall, is an essential open air presentation of life in Berlin from 1933-45. 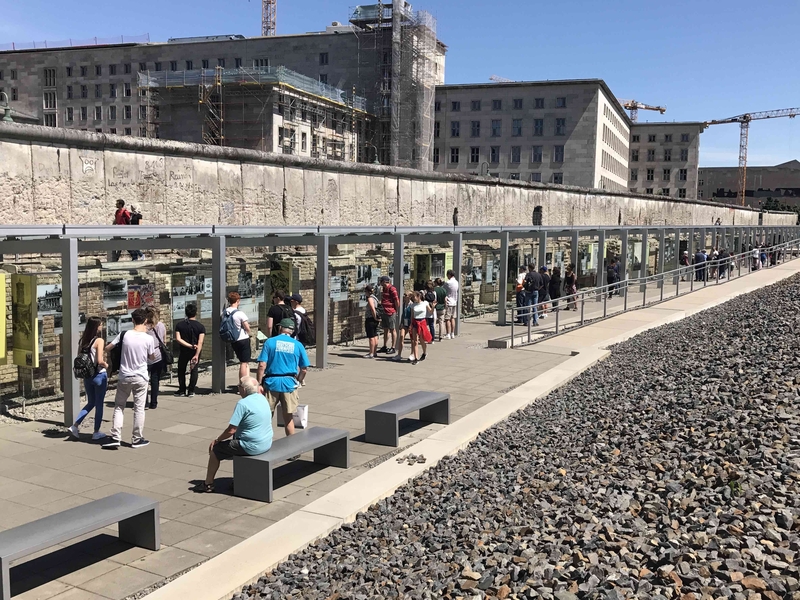 Immediately upon reunification, the city bought a stretch of the Berlin Wall on Bernauerstrasse to keep as a memorial of the fortified dividing line that was suddenly imposed upon the city by the East German regime in 1961. The visitor centre charts how families were separated on that fateful day. Elsewhere across the city are preserved segments of the Wall. Within an easy canalside walk of my hotel near the Hauptbahnhof (main station) is the Invalidenhof, a 19th century graveyard poignantly preserved by being in the ‘death strip’. Here it was in 1962 that West German police shot dead an East German border guard to rescue a 15-year-old boy who was in the process of escaping. There’s a poignant memorial on site. 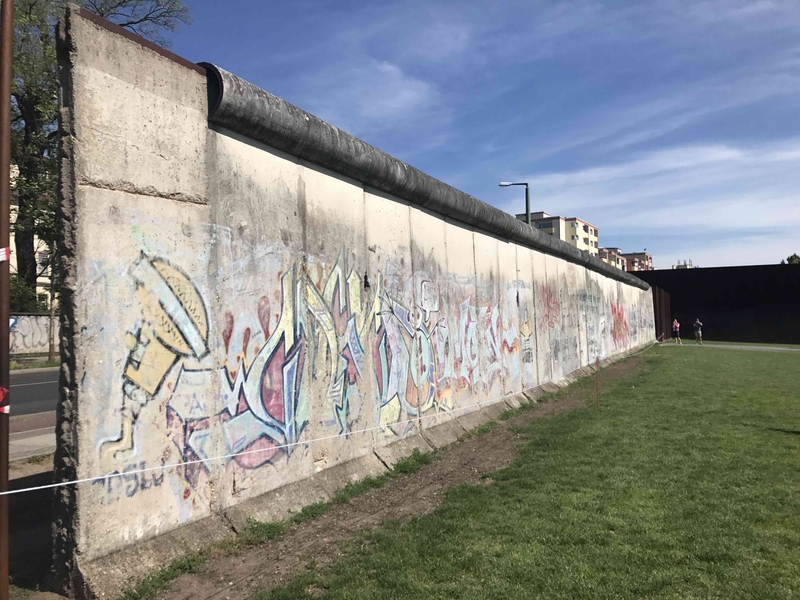 Five great museums cluster on the site of the original Berlin river island settlement. You could spend an entire week exploring the collections. Pick one? Perhaps the Pergamon built over a century ago in the style of a Babylonian temple to house the treasures German archaeologists were plundering across the globe. Stand-outs are the ancient Pergamon altar itself unearthed in eastern Turkey and the reconstruction of Babylon’s Ishtar Gate with its eerily preserved deep blue bricks and and sculpted mythical beasts. If all this monumentalism leaves you cod slip into the nearby Alte Nationalgalerie, whose collection of predominantly 19th century art boasts some wonderful Romantic landscapes by Caspar David Friedrich.

If all this history is too grim, escape to this glorious celebration of international garden design and green urban lifestyle, on until October 15. It’s a half hour journey from the city centre but a must for a garden enthusiast and with lots to occupy the non green-fingered.

He flew to Berlin from Manchester with Ryanair, just one of the bargain direct flight options.

For full tourism information go to the Visit Berlin site and to book a Berlin Welcome Card, official tourist ticket giving access to public transport and many attractions plus 200 discount offers (from 19.90€ for 48 hours) go to this link.