Mountain air and melodies in the Austrian Tyrol

ANY city that builds a ski-jump overlooking a graveyard must have a sense of humour. Look over from Bergisel Olympic ski jump to a picture postcard view of the Nordkette mountain across the valley. Gaze down and, well, sometimes it’s best to keep your chin up.

Innsbruck is the Austrian city where Channel 4’s The Jump is filmed, although not at this ski site. One, because it’s too high and two, anyone who takes up the sport after the fearless age of six when most Austrian’s start, doesn’t need a view of headstones as a reminder where one wrong move could lead.

After numerous trips hearing the words “And now we’d like the journalist to have a go,” I can’t tell you what a relief it was to learn Bergisel, at 50m high, is reserved for the professional ski jumper. In January, it’s host to the International Four Hills Ski Jumping tournament when the stadium holds up to 28,000 spectators. In summer, it’s used by the Austrian national team for dry slope training. That means most days you can take a short bus ride from the city and watch the team practising.

Travelling in July there were no more than a dozen of us at the viewing point above and even fewer watching from below. The viewing platform has a glass partition to about waist height separating it from the inrun which means you can stand with no restrictions and watch a ski-jumper set-off down a 98m long run before taking off into the air at speeds of almost 60mph.

Being open to the elements, anyone on the platform can hear the noise of the skis followed by the silence of the jump. You don’t need to be a skier to feel an incredible rush of excitement on hearing the skis hit the ground again as the skier, now little more than a dot, races back into view.

The adrenaline jolt made me think perhaps the graveyard view is less about death and more about living life with unbounded freedom. That said, the experience didn’t make me consider adding a ski-jump to my bucket list any time soon, but it did make me think generally about being more active. Simply breathing in the Alpine air is enough to inspire healthier lifestyle choices, and in Innsbruck there are plenty of activities, aside from skiing, for all ages and abilities.

That afternoon we took a cable car 2000m up the Nordkette mountain and climbed another 100m or so to the peak. There are walking and mountain bike trails to the top but we saved our hike for the following morning when we were back on the other side of the valley, ascending the Patscherkofel mountain by cable car to the start of the Zirbenweg/Stone Pine trail.

As its name suggests, this is a rocky path, so sturdy shoes are advised and in summer temperatures, although cooler than the city, can reach well past 30 degrees Celsius. The trail is wide and rises and falls gently, with spectacular views onto the forest below, the city, its wide river which shimmers a glacial green, and the opposing mountain range.

It takes about two-and-a-half-hours at a brisk pace, with a rewarding Tulfein mountain hut café at the other end, and the Glungezer chair lifts (the region’s oldest) which drop us within a stone’s throw of a bus heading for town.

Public transport in Innsbruck is convenient, clean and feels safe. The Austrians are environmentally conscious. For a large city, there are relatively few cars on the streets and public water fountains run freely to cut down on plastic bottle waste. As a tourist, everything feels a little bit slower than you’d expect for city life. It makes you want to be more present in the moment and notice the individual quirks of the pastel painted town houses; be dazzled by the copper tiles of the city’s famous Golden Roof, and while away an afternoon in a pavement café on the narrow streets of the old town, for which I recommend, Strudel Café Krull.

Every evening in July free classical concerts are held in the courtyard of the Imperial Palace, once home to the Tyrolean sovereigns. There’s seating for about 300 and plenty of standing room but, if you want to add a royal touch, book a table on the patio of the Café Sacher where you can eat dinner while enjoying the best view of the orchestra.

It feels special and relaxed at the same time. There are people of all ages and nationalities enjoying the music, even if some choices, like Mendelssohn’s Wedding March, feel at first a little out of place. Here it’s mixed in with other romantic pieces ranging from Carmen to a medley from West Side Story.

Across the square men are wearing lederhosen without a hint of irony or the chance of a Sound of Music sing-a-long. I ask our guide: “Is it usual in the Tyrol for men to dress in traditional clothing like that?” She seems surprised by the question and answers: “Yes, if they like it, why not?”

Heading back to the hotel at 10.30pm, people are queuing outside an ice-cream parlour. It feels refreshing, as if the mountain breeze has blown away all pretence of urban cool from this city, and I like it.

Carmel flew from Gatwick to Innsbruck with easyJet, but there are direct flights from Manchester using Flybe with a 2 hour 10 minute flight time. Innsbruck airport is a 15 minute drive from the centre of the city and once there an Innsbruck card from €39 for 24 hours includes travel on the sightseer and public buses, as well as the cable cars and entry into many attractions and museums, including Swarovski World. 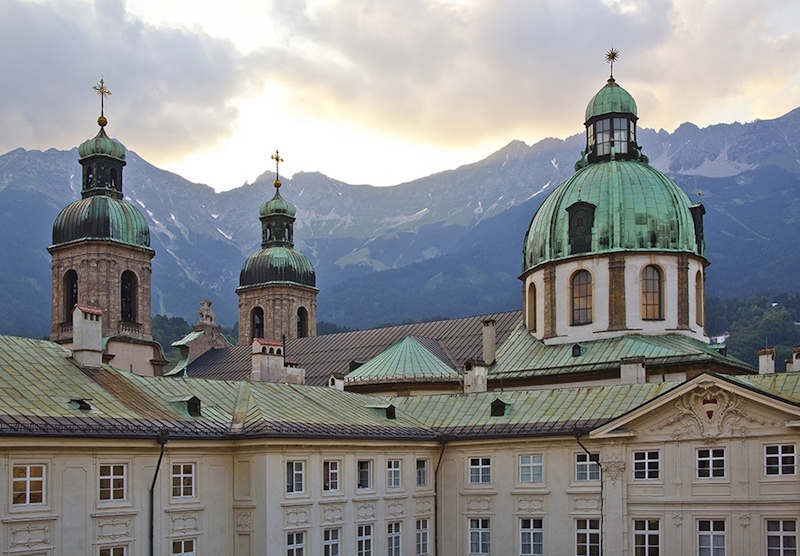