Instead, we’re giving you the scoop on some of the many delivery options that have sprung up. We’ll buy it, eat it - cook it if we have to - and let you know how it was. We’re not going to be scoring these ‘reviews’ - it doesn’t seem right - but we’ll let you know what you can expect and where's worth spending your money.

What - Churrasco Steak House at Home

Wine bars and eateries in South Liverpool come and go quicker than a Yodel delivery driver, but in the five years since Churrasco Steak House opened they’ve managed to turn this Aigburth Road outpost into one of the city’s best loved restaurants.

Churrasco would have been well-suited to the eclectic architecture and buzzing foodie scene of Hope Street. Instead, it landed in the middle of suburbia, next to Sefton Park Library and opposite Tesco Metro, slap bang at the end of Lark Lane, but not quite on Lark Lane.

Definitely the most fun you can have without leaving the house

Despite being just a stone’s throw from my house, I only visited Churrasco for the first time in August during ‘Eat Out To Help Out’. After years of walking past this quirky back to front building with its twinkly yarden and ski lodge, in the end it was half price food that got me through the doors. I was grateful for that kick up the arse though because my first experience was unexpectedly awesome, including a very memorable Moldovan Merry Mole Malbec. If the alcohol doesn’t make you giddy then the alliteration certainly will.

I wish I’d taken the leap sooner. Before I had a chance to go back for a full-price meal, we were all bouncing in and out of lockdown like Joe Wicks on Berocca. When I saw that Churrasco had launched ‘Stay-K at Home’ (their pun, not mine) I did a few star jumps myself.

There are two weekend deals available for collection or delivery.

The first is a cook-at-home version of their popular ‘Date Night’ restaurant deal including two steaks, four side dishes and peppercorn sauce, priced from £32.

The second option is a premium steak cut that changes each week, again, with sides and accompaniments. I’ve always dreamed of being King of the Grill so my weapon of choice was the 37oz Tomahawk, the daddy of all steaks boasting 8 inches of bone handle and a thick chunk of ribeye. Not today, Veganuary.

Total cost for the tomahawk dine-at-home package for two people was £69.99 including wine and dessert.

This would work well for all levels of home chefs; there’s nothing too complicated that a novice couldn’t complete with the help of the printed instructions or YouTube video, but the premium steak also gives more advanced cooks a bit of a challenge. I’ve never cooked a tomahawk at home before and the only issue I had was that this beast was a bit too big for my frying pan. There aren’t many places where you can buy a cast iron griddle at 7pm on a Friday night in lockdown.

Most of the sides came vac-packed with minimal prep needed. Garlic and chilli prawns came straight out of the packet into a frying pan, cooked with white wine and butter (provided). Green vegetables were stir-fried and then thrown in the oven to get the authentic charred effect. The Churrasco signature side of jerk corn ribs was microwaved in the packaging and then smothered in the secret recipe sauce. Simple, but so good. The most complicated side dish was fondant potatoes, pan-fried on both sides for four minutes, adding chicken stock, thyme, crushed garlic and butter (again, all provided) and cooked in the oven for 45 minutes.

My kitchen pan might not have managed to fully accommodate the tomahawk bone but I still managed to caramelise the outside and seal in the juices before it went in the oven to finish. After resting for as long as the cooking time (I did learn something new!) the steak carved into succulent chunks of ribeye, pink and juicy in all the right places.

Churrasco owner, Graeme Parry, presents a live cook-along video each week for you to join in with too, which is a nice feature, well presented and easy to follow.

The cost for two people is £47.99 including sides, but you can also add on wine (for us, a bottle of that marvellous Merry Mole at £13) and desserts from local baking legend Desserts By Dre (£9 for two). Sticky toffee pudding just had to be heated in the oven for three minutes and came out as perfect as the day it was baked. All of our food tasted fantastic and looked pretty decent too, considering we’re not professionals. The whole package is a very entertaining way to spend an evening, something a bit different and definitely the most fun you can have without leaving the house.

Churrasco Steak House is an independent business that has nailed a gap in the market for top quality steak with a virtual masterclass in how to cook it properly. Let’s hope that it lasts longer than just lockdown. Now, if Graeme can just send somebody round to do the dishes, then my life would be complete. 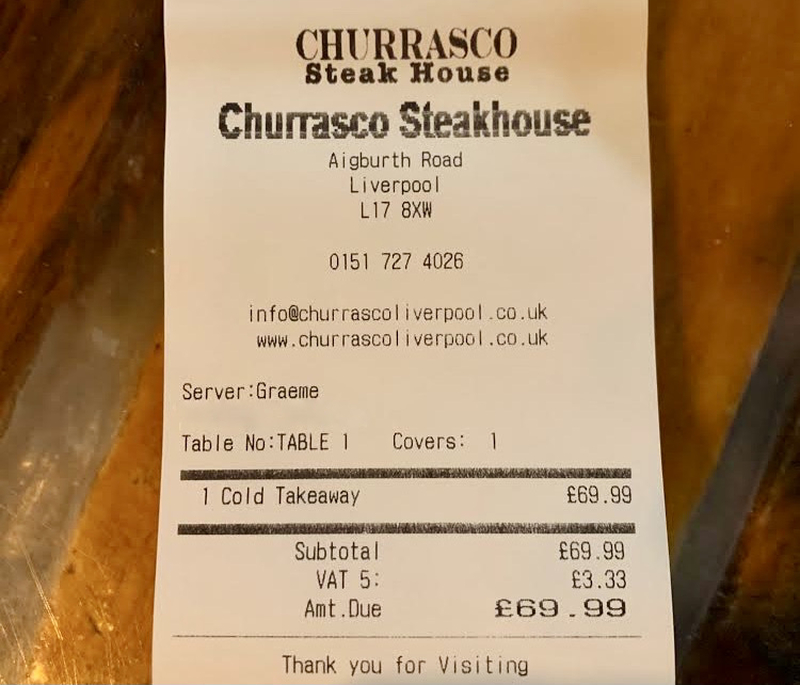