Call me a daft old bugger, but having spent an awful lot of my life in marketing and coming up with names for things, the lesson is to keep the brand name simple and the pitch even simpler. The best example is Coke. Even I can spell that one. And the message? Drink Coke. Simple.

The Editor called and told me to get my arse to a newly opened restaurant on Albert Dock. “It’s called Lerpool and it’s by the guys who own the ace Marram Grass in Anglesey, the Barrie Brothers,” she said.

The website states that the dishes ‘sing of local produce’. Lloyd Webber would employ this one

I spent a good hour trying to find Lerpool on the t’internet. Eventually figuring out it’s actually spelt Lerpwl. How very stupid of me not to know.

I’d invited an old pal to come to Sunday lunch. Cat was already there when I arrived throwing a glass of wine down her neck. The dining room is stretched around an open plan kitchen where there were six or seven chefs getting on with the magic in a quiet and orderly way. A good looking, eclectic crowd were already hard at it, drinking and chatting; it’s decorated in a modern, yet homely feel and the furniture is super-comfy.

With smiles all round from front of house, it all added up to one of those walk-throughs that gets you in a good mood for a chatty, well-oiled lunch.

I joined Cat in an English champagne-style white, the NV classic cuvée ‘multi’ vintage Nyetimber. It’s on the list at £50, not a bad price - but don’t have a couple of glasses at £12.50 each first and then the bottle. You’ll cry.

I ordered the bottle, giving out the code, “I’ll tell you what, let’s have the rest of the bottle”, expecting the time-honoured tradition for the Sommelier to make a concession on the pricing. Nope, the bill showed £50 for the bottle plus £25 for two 125 ml glasses. It’s not a bad thing, but even in the bar at George V in Paris, where your eyes bleed as you look at the l’addition, they cut you a bit of slack.

Don’t stand between Chef Barrie and a bag of money. You’ll get hurt. The prices are pretty steep, whilst the dish descriptions, unlike the restaurant name, are unambiguous.

‘Mackerel’ (£14). That’s all you get in the way of a description. Surely chef just drives down the coast with his windows open allowing the buggers to leap in the back seat, because you couldn’t get fresher.

Crikey, this was a good plate of food. It knocked me sideways; a fresh iodine smell, a chunky tranche of the fish, cooked sparingly, seasoned masterfully and jostled by some pals.  The resultant dish made my heart quiver. The website states that the dishes ‘sing of local produce’. Lloyd Webber would employ this one.

The bread is top notch, the butter not entirely to my taste. I’m all for trying the flavouring route, but generally simple portions of salted and unsalted home-made butter, particularly from Anglesey cows would get my trousers tingling.

‘Crab’ (£16) was in the form of a risotto, the rice being shavings of celeriac, which if hadn’t been for a well-flavoured brown-crabby foam might have fallen a bit flat.

We decided to share the Whole Roast Duck, not cheap. Billed (geddit) at £35 per person, for a minimum of two people, that’s £70. Sounds a lot for one duck, but remember a restaurant has to charge £4 for every £1 the raw ingredients cost. If the chef wasn’t shooting them himself, he’s paying around £23 each.

There’s a ‘but’; let’s park that for a minute. The duck came in three servings. First, a few thin slices of breast that had been turned into a duck ‘ham’. Immense deep flavour. This is then followed by a broth, made from duck bones; umami, farmyard, chestnutty.

Then the whole duck was brought for our inspection. It looked fabulous, all brown and crispy, basted with stuff with bits in. Head chef, Ellis Barrie, one of the three brothers who own and run the empire, was standing in front of the table with Donald on the plate. He’s a good feller, big smile on him. The chef that is. After some ‘oohing’ and ‘aahing’ he took it back for the carve up. Back came two portions of breast, cut diagonally in thick slabs, just off pink; very much like a perfectly roasted Cantonese duck.

But that was it. I was expecting the legs, possibly La Tour d’Argent-style, to arrive all crispy, with a great salad. But no, 2/3rds of the breasts and that’s yer lot Guv. Maybe the other third was made into that ham; if so, it had shrunk an awful lot. But the legs? Had someone nicked them?

We had a bowl of veg from the garden, sort of Singapore style, and small new potatoes deep-baked in their jackets. Both on top form. Chef, you need to be doing a bit more under-promising and over-delivering for £70. But what was Donald like? Bloody spectacular. Everything a duck pervert like yours truly could want. Even with no legs. And don’t be telling porkies chef, they weren’t in that broth either.

Puddings were spectacular, a soufflé (£16) and a Liverpool tart (£16.) Both standouts, with the soufflé standing out a tad more. It was a delightfully light new twist on pudding and custard. Get one. Neck the bugger without thinking about the price. It’s a right piece of work.

I asked the sommelier to choose another bottle of wine. He came back with a 2017 ‘Plexus’ Barossa Shiraz/Grenache/Mourvèdre by John Duval in South Australia (£71.) This little forest-fire-dodger was a hit; the first wine made by Duval after leaving the dark side over at Penrose. Big hedgerow fruit, some cigar box smokiness knocking about.

This restaurant is a serious addition to Liverpool’s scene. It immediately takes its place in the top four in the city, and in my not-so-humble opinion, top thirty in the North West. It brings a bright, ingredients-led post ‘New British’ cooking that has a deftness of touch from a chef who knows how to wring out flavours without being a modernist wanker. Importantly, unlike me, he knows when to stop.

Mind you, that name guv…

Ps. I just ran a spell check over ‘Lerpwl’. When I pressed the ‘add’ button, Siri told me to fuck off. 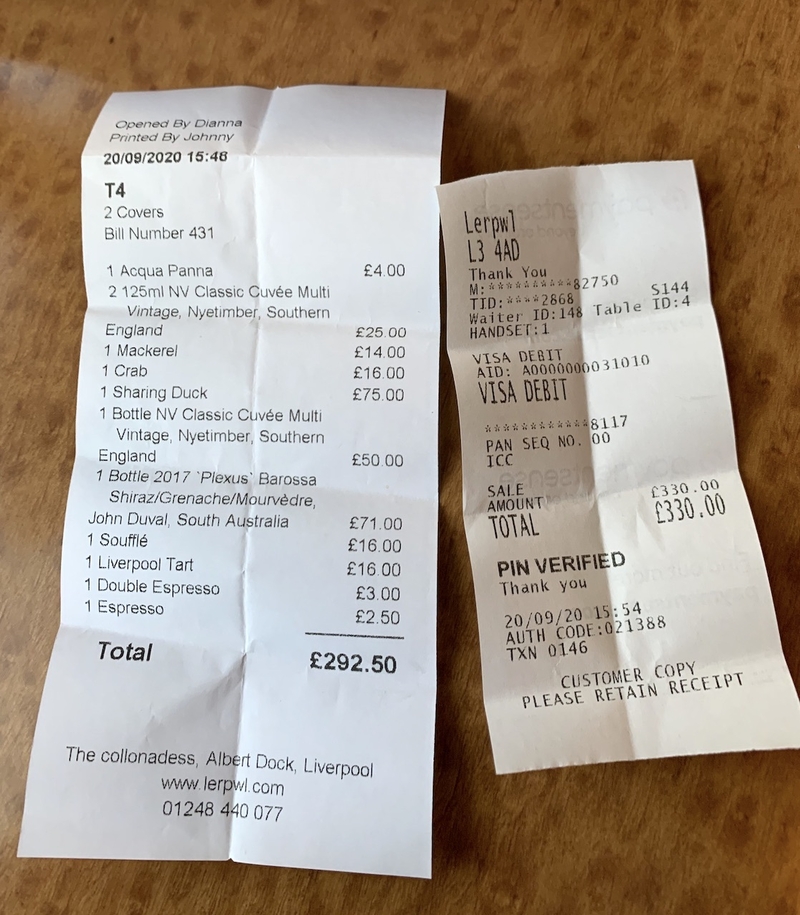