'A vegan restaurant in Larkhill... and it's full?' - Indigo Greens, Larkhill, reviewed

IN the future, we will all be vegans. Or face the consequences.

In Brexitland, we have long harboured a curious attitude towards those pursuing the meat and dairy free option.

Many regard it as the preserve of the middle classes, those with the luxury of time and energy and enough money in the bank to not have to rely on their local foodbank for supplies of organic goji berry juice.

I can’t hear the word vegan without being transported back to a 1983 episode of sitcom Just Good Friends, where class and snobbery helped fuel the rollercoaster romance of the wideboy Vince and the well-bred Penny.

In 1983, veganism was an alien concept to most Britons. Asked by Penny’s snooty friend, “do you know what a vegan is, Vince?” he replies, “Absolutely. I never missed an episode of Star Trek.”

Alternatively, veganism is said to be integral to an alternative lifestyle practiced by weirdos in sandals who believe the path to enlightenment lies in daily consumption of cardamom tea and squeezing the life out of the nearest sycamore.

Vegetarians, and especially vegans, are condemned as suspect, flaky, lacking steel, as if eating a cow’s arse makes a man (or, obviously, woman) of you.

All in all, you might expect a vegan restaurant to have a better chance of putting derrieres on chairs in the self-styled Bohemian enclave of Lark Lane than on the fringes of the Larkhill estate.

When owners Patti Bullock and Mark Aston announced their intention to open on Queens Drive, advice to the contrary was bluntly expressed.“A vegan restaurant in Larkhill?” one said,“you’ll do shit.”

They are now eating their words between spoonfuls of omega 3-augmented bircher muesli. When we went, the place was close to full. It was Tuesday lunchtime, a time at which the number of staff in most restaurants outnumbers the number of customers.

The punters are a mixed bunch. The nearest thing to a hippy is a late fifty-something man badly in need of a haircut. Otherwise, the demographics are encouragingly broad: male and female, young and old, and parents with young children who wait patiently in the street until a table becomes available.

I’m not mad about the faux foliage sprouting from the ceiling, but a giant, hand-painted mural created by local artists Marky Walsh and Jade Bell is striking, impressive, covers an entire wall and sets the tone.

Tables named after positive affirmations – love, kindness, compassion, gratitude – and, among largely pleasant meditative background music, a five-minute spell of insistent Buddhist chanting, are gifts to those who seek to mock the plant-based life, but you have to love their attitude.

Head chef Patti also happens to be a qualified holistic healer and the L13 premises play host to yoga, meditation, sound healing and more in the wellness centre at the top of the staircase, in whose ascendence lies transcendence.

Aston and Bullock, the talented head chef, had been mostly unimpressed by the vegan food on offer in Liverpool, so decided to take the somewhat extreme step of opening their own restaurant. An encouraging response to pop-ups at vegan fairs and food festivals supplied the courage to take the leap. In doing so, they have very quickly established themselves as the best destination, by some distance, for vegan food in Liverpool.

For now, opening hours are restricted to daytime (8-4, Monday, 9-5 Saturday, 1-6 Sundays), with a smallish but interesting menu with everything from fresh-baked banana bread with peanut butter and jam (£4.50) for breakfast, through to the Sunday vegan roast (advance bookings only), featuring cranberry, orange and sweet potato nut roast, with lemon thyme garlic spuds. People say it's an absolute treat, and I believe them.

Beans on toast is taken to a new level. Here, rich Mediterranean braised beans (£5.50) come with smokey chipotle and organic hummus, finished with chopped chives, parsley and a handful of sesame seeds. It’s served on nicely charred light rye toast, alongside beautiful roasted cherry tomatoes, the only minor negative being a tired handful of rocket.

TLT (£5.50) packs more allure than the classic sandwich that inspires it: griddled slices of organic tofu, infused with chilli, and dressed up with beef tomato, lettuce, onion, drizzles of mayonnaise and grilled vegan dairy-free  “cheese” - a contentious item, which they tell me does not make for the best cheese on toast but softened under the grill adds another welcome note to this dish. Wedged amid slices of crisp toast, it might not sound much but it works.

Sweet potato wedges (£6.50), from the specials, are a glorious marriage of textures and flavours. Twice roasted and caramelised in spices, they’re topped with spoonfuls of home-made hummus and pesto and finished with smokey chipotle, sprigs of pungent coriander, pomegranate and roasted sesame seed and cashew nuts. For good measure, the plate is glazed with a sticky balsamic syrup that’s been reduced down with rosemary, thyme, lemon and organic cane sugar.

Wash it down with a (refillable) pot of Happy Tea (£5), a delightful, moreish blend of moringa and sencha leaf, the colour of healthy wee (and who wouldn’t have healthy looking wee after a week of eating here).

We’re told Bullock can’t follow a recipe and goes her own way. They will drive her food to your door too, if you prefer. They deliver? You bet they do… 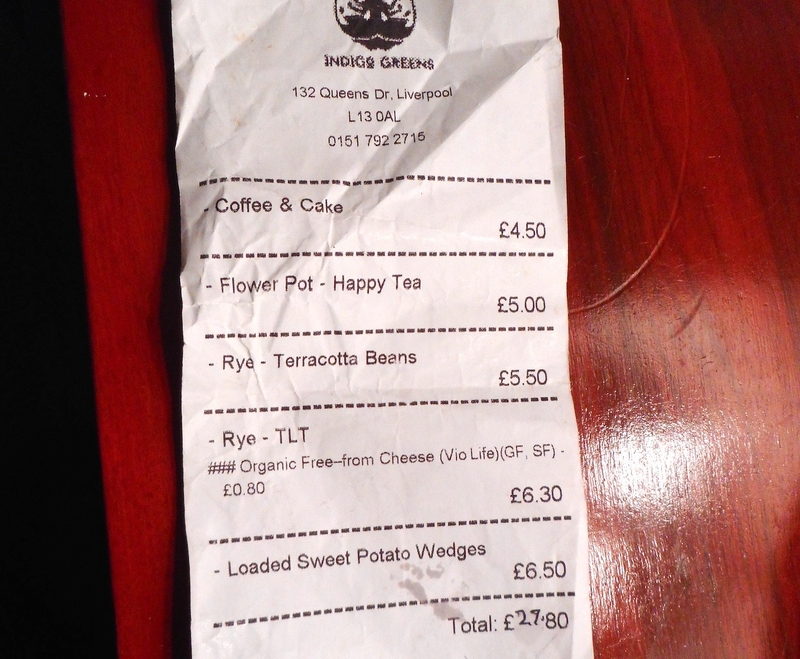