‘If anyone can carry off a fish restaurant, here is the man’ - Cargo Seafood, Princes Dock, reviewed

The stars are lining up for a ship that’s found its lost compass, says Angie Sammons

FOUR years ago chef Skevos Paraskeva told me how it was his dream to open a fish and seafood restaurant in Liverpool.

We were at the opening of Cargo, a waterfront venue that planned to serve “Mediterranean dishes tailored to the English culture”.

Skevos himself was the cargo, it emerged, imported by West Derby builder Terry Connor and his wife, Angela, who had enjoyed his cooking so much they persuaded him to up sticks from his sunny Limassol home, where he had owned two restaurants, and run the kitchen of their brand new venture at the base of a tower block in a lonely, miserable corner of Princes Dock.

One can only imagine how they pitched it. 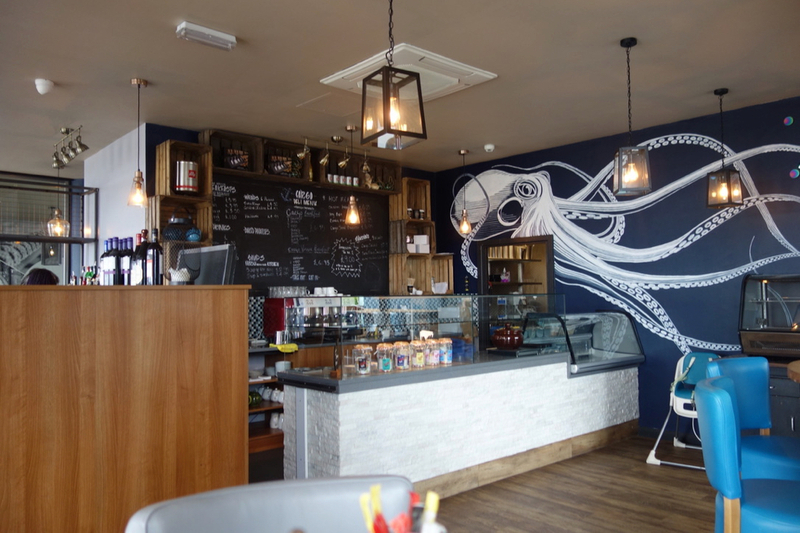 Always the last to leave we hung around until way after 11pm on that August 2014 night, having realised much earlier on that here was a talent. Rarely had ordinary, crowd-pleasing meatballs and tomato sauce been produced with such expertise and care. Not around here anyway.

And then came the magic as the skipper and his first mate, Dino Kottis (now running Greekosophy), began showing off, cooking up a storm of off-menu Greek and Cypriot joys in the spanking new kitchen. So impressed were we that when talk of a fish restaurant was mooted I sensed that if anyone could carry off what is perhaps the most difficult restaurant enterprise, here was the man.

The chef and Cargo parted company in the autumn of 2016 and the place closed, relaunching under new ownership eight months later. But, by all accounts, this was a ship that had lost its compass.

Then last month came the mutterings: Cargo was setting sail with yet another new owner. This time as a seafood restaurant with a familiar name - Skevos Paraskeva - back in charge of the cooking.

"We are a work in progress,” says Costas Constantiniou, possibly Liverpool’s most affable GM with a lifetime in the industry, who tells me how this is just baby steps and how, in a couple of months they will relaunch officially with proper menus instead of the make-do flyers and a fresh new look. Staying will be the epic, maritime murals from Paul Curtis (better known for the Angel wings over in the Baltic) and the breathtaking sunsets which come free of charge.

We have gone in on the off chance, knowing none of this, yet whatever shortcomings need to be addressed, the food, like the goddess Athena, has sprung into the world fully formed and fully armed.

When did we last witness a parade of Alien-lookalike langoustines perching like a guard of honour over a plate of gleaming squid, octopus and lobster; a pasta elevated by a tomato broth born from years of culinary integrity? It’s been a while - and it cost a lot more than £13.95.

Or a perfect necklace of monkfish tail served over a creamy, finely tuned sauce of garlic, shallots and ginger (£14.95, main image). For here is a chef who knows just when to stop.

Mussels, bright and beautiful (£6.95) are eagerly devoured, the shells used to spoon up yet another lake of loveliness. Then some huge tiger prawns (£8.50) this time over a flourish of shallots, garlic, chilli, lime, saffron and a base homemade fish stock which runs through the lot, giving everything its whip.

Skevos occasionally appears with the food - explaining how this and that has been done. One time he drops off a surprise plate of excellent, fat spunta chips - or Cypruses as most people will recognise them. Another time, before he rushes off again, we’re treated to a kicking taramasalata, grainy hummus and a red pepper thing with good pitta. In between he talks of plans for one off nights with special themed menus.

Desserts, at the moment, are powered by Liverpool Italians Paolo and Donato whose ice cream making business has blossomed in recent years. This means I get to ponder the container ships rolling in over a light-as-air chocolate trifle (£5) and a glass of sauvignon blanc from a small but perfectly fine list which, Costas says, is another holding operation.

It seems the planets are lining up for Cargo, not just in terms of the staff in place. The cruise terminal is about to relocate to its doorstep, and the Isle of Man ferries too, which means that this corner of Princes Parade will be miserable and lonely no more. And then there’s the Everton stadium.

My colleague was in a hurry to get to work, otherwise I would be telling you how we luxuriated over the live lobster and the seafood risotto, but maybe next time.  And there will be many next times.

Having already been rumbled by the Cargo’s first owner, Terry, who still owns the unit and who just happens to be dining with a big group nearby, Costas is looking ever so slightly horrified, not because I have just told him the food in his restaurant is fantastic but that that everyone should know about it. Right now.

“Ha, when we’re ready,” he laughs. I tell him I’ve got to get this done in the next two days and I end up apologising for what is going to be a very high scoring review.  There’s a first time for everything. Sorry.