The founders of renowned Liverpool restaurants Belzan and Volpi, together with the folk behind London’s popular Breddos Tacos, have announced they are to open a new collaborative Mexican taqueria, MADRE, at Royal Albert Dock in November.

The 100-cover restaurant will offer seating over two floors, with a dedicated bar area and a large outside courtyard at the Grade 1 listed site on the Atlantic Pavillion.

we needed a special space, we never thought somewhere as prestigious as the Royal Albert Dock would be possible

MADRE, meaning mother in Spanish, will be a taqueria inspired by the food culture of Mexico City, a place Breddos founders Nud Dudhia, Chris Edwards and Sam Grainger have visited countless times over the last 15 years.

Breddos’ journey began in a makeshift taco shack in a car park in Hackney, where it quickly garnered a loyal following for its creative take on traditional Mexican tacos. Word of mouth spread, which led to a series of supper clubs and a long term residency at London’s Street Feast food markets. A takeover in Soho’s The Player and Haggerston’s Trip Space helped Breddos develop its culinary offering and operational experience for running a restaurant. They released their first book in 2016 and were the first non-Mexican American outfit to be invited twice to the prestigious Tacolandia in Los Angeles. They have since opened two taquerias in London (Clerkenwell and Soho) and launched a spin off concept, Super Tacos, both to critical acclaim.

The Breddos/Belzan partnership came about after a sell-out collaborative pop-up in Liverpool during 2018. After Breddos’ first visit to Liverpool, they fell in love with the city and its people and knew something brilliant could come out of this partnership. The five directors of Breddos, Belzan, Filter & Fox and now Madre, have a combined 35 years’ experience in the food and drink industry.

Speaking about the new restaurant, co-founder, Nud Dudhia said, “After years of trading in London we’re super excited to collaborate with some Liverpool legends and create something entirely new and exciting for the city. MADRE will be a place you can stop in for a bite, or stay all night listening to DJs, eating small plates and drinking cocktails with friends.”

MADRE will serve lunch and dinner with a late night snack selection at weekends, when the bar will remain open until late. Lunch will feature a varied selection of authentic tacos such as Iberico pork al pastor, Jalisco style shrimp and beef short rib birria with black pudding mole. The evening menu will include larger sharing dishes to be eaten family style, such as half a pig’s head chicharron, butterflied sea-bass divorcioados and hogget barbacoa. The menu has been designed to be original but accessible, fun and big on flavour, with all produce sourced as locally and sustainably as possible.

The drinks list had been compiled by the award-winning team behind Belzan and Volpi, and features a stellar list of margaritas, craft beers, and natural wines - to wash down tacos late into the evening, accompanied by an eclectic soundtrack at the weekends.

Co-founder Sam Grainger said, “When we first set out on this journey we knew we needed a special space, we never thought somewhere as prestigious as the Royal Albert Dock would be possible. It’s an unbelievable site with boat loads of character and we hope to deliver a food and drink offering to match. We’re so excited to welcome everyone from far and wide to MADRE to drink, eat, party, dance on the tables and more than anything, feel like they’ve been welcomed into their family home”

“Re-establishing the Albert Dock as a major food and drink destination in the north is such an amazing project to be part of,” added Co-Founder Chris Edwards. “Between us, our team has amassed an incredible amount of hospitality experience, and we cannot wait to pull it all together with MADRE and showcase everything we love about Mexico’s food and drink.”

Retail Portfolio Manager of Aberdeen Standard Investments, Gary Sleator, commented, “We’re thrilled to welcome MADRE to the growing mix of established and new independent restaurants here at the Dock. In addition to Rosa’s Thai Cafe, this is the second London brand which has chosen the Dock as its new location, reflecting the impressive line-up we are curating”.

What you say
Got an account? Login, to comment/rant.
0 Opinions
Previous Article
Read Next
● / Dinner 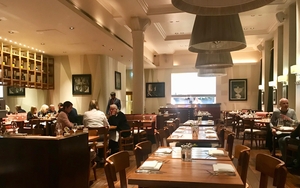