Liverpool is world-famous for its musical sons and daughters, but how many bands and artists can you name from the other side of the water? Probably more than you think, actually. Music isn’t just about the history books though, it’s about the future - and nowhere knows that more than Birkenhead.

This will be a journey of musical discovery and urban exploration

To shine a spotlight on Birkenhead’s surging creative scene, an animated music walk has been created featuring newly commissioned compositions from some of the town’s iconic musical talent.

The soundtrack includes Andy McCluskey from OMD, Louisa Roach of She Drew The Gun, Matthew Barnes of Forest Swords, musician and composer Andrew PM Hunt, Nigel Blackwell from Half Man Half Biscuit, and singer and songwriter Bill Ryder-Jones.

Produced by Future Yard, The Leftbank Soundtrack is designed as a sonic walking tour through the streets of Birkenhead, uncovering its tales of past glories, future stories and the culture that has created the town.

The animated music walk is the result of a collaboration between music and place - each of the artists has been twinned with a location in the town’s centre. The piece of music they have created is inspired by that place’s sounds, history, people and heritage.

From the banks of the River Mersey to the imposing ventilation tower, the historic priory or Argyle Street, visitors will be able to walk the route and access the new compositions at each site via their smartphone.

The project officially launches on Friday 27 August, as part of the Future Now festival during August bank holiday weekend.

“Birkenhead, like the whole of Wirral, has music in its DNA,” says Craig Pennington, founder of Future Yard.

“We have a unique story to tell. The Leftbank Soundtrack will tell the stories of our town through the musical perspectives of some of our finest noise makers.

“This will be a journey of musical discovery and urban exploration, an opportunity to reimagine spaces you pass by each day and discover a whole new perspective. Grab a smartphone and pair of headphones and let the journey begin.”

Andy McCluskey of OMD says, “It’s a fascinating and interesting concept for Birkenhead and as a Wirral boy born and bred I am delighted to be a part of the Leftbank Soundtrack.

“My first bass guitar was bought from Park Selling services over 45 years ago. Perhaps this is me coming full circle?

“The ventilation tower is an iconic building hard against the Mersey and it’s a really exciting challenge to create a musical piece for it. I stood next to the tower doors in early July and recorded the sound of the wind whistling through them.

“These recordings became my inspiration and bed track for the music. For those who are curious - the tower whistles in the key of A.”

Here's the full list of locations on the Leftbank Soundtrack walking tour. The striking art deco ventilation tower dominated the skyline of the Leftbank. It ties together Birkenhead’s built environment and transport infrastructure. As well as having a technical function, it is a significant landmark and echoes a period of town planning and design filled with ambition. The 1920s is an important chapter in Birkenhead’s identity, when even the most functional space is infused with design credentials. The ferry is always a reminder that music and the landscape are closely entwined. The ferry terminal is being transformed into a destination, a place to eat and visit, instead of merely a stop on a journey. The Mersey is tied to the history and heritage of Birkenhead, just as it is to Liverpool's. The shift towards a visitor economy, bringing visitors along the waves instead of cargo and business, is another step in the town’s story. From here you look at one of the oldest buildings on Merseyside and its social and ecclesiastical heritage, while to the right you see Cammell Laird, a site so vital in the region’s industry over the past two centuries. Tying these two locations together does much to articulate Birkenhead’s medieval role and history alongside its industrial character. 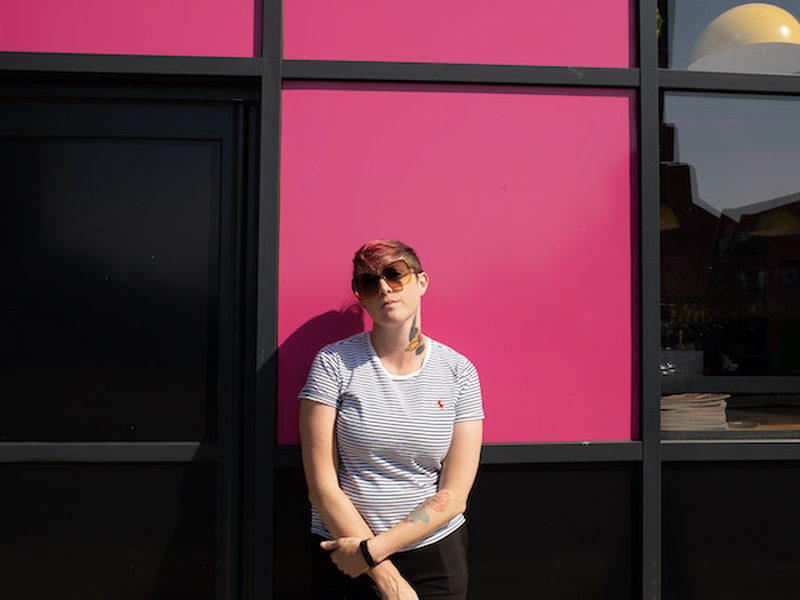 Future Yard operates in the shadow of long gone music venues, like Stairways. It’s often thought that bands just travelled to Liverpool, and that the musical heritage of the city region is dominated by the Beatles. But Birkenhead has hosted a range of bands from Carcass to Faith No More, Little Richard and the Buzzcocks. The space on this wall, above the loopline, allows the Leftbank Soundtrack to tie itself into the past, present and future of Birkenhead. Mr Digby’s and Central Hotel are two venues which are either demolished or in a state of disrepair. The importance of cultural heritage, regeneration and rebuilding is emphasised here. The Pyramids, across the road, is the site of investment, while behind the station, at the old gasworks, new houses are to be built. Birkenhead is about to embark on another period of change, and reflecting on the balance between the past, the present and the future is vital.

To take part in the animated music walk in Birkenhead visit Leftbank Soundtrack.

Tickets for the Future Now festival at Future Yard cost £20 for day tickets and £35 for weekend tickets, available from See Tickets.

All images courtesy of Robin Clewley

Read next: 'The Baltic Triangle has still got a long way to go' - Stephen Crawley