TV'S Sunday Brunch chef Simon Rimmer is opening up in Liverpool, it will be announced later today.

The Wallasey-born founder of the award winning vegetarian Greens, in Didsbury, and Earle in Hale, is set to take over the restaurant at the new Doubletree Hilton on Dale Street.

Liverpool Confidential understands it will be called Simon Rimmer at Layla - a modern British brasserie featuring an additional but significant vegetarian element.

It is Rimmer's first direct involvement in a restaurant on his home turf and hopes are high that it will raise the food and drink bar a notch higher when it opens next January.

Layla is the name of the daughter of Salford Reds rugby club and racehorse owner Dr Marwan Koukash who is behind the plan. Koukash was one of the stakeholders in the original hotel scheme, the much talked-about Hotel Layla. 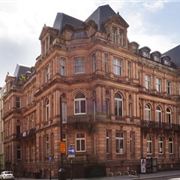 From gentlemen's club
to council Municipal AnnexHoused in the Grade II Municipal Annex and two other adjoining buildings, Layla was set to be Liverpool's first five-star hotel, but the joint venture ran out of steam last year when its other main stakeholder Illiad, sold out of the venture, which it said was 80 percent complete.

Interstate Hotels (Sanguine Properties), which already runs the Hotel Indigo on Chapel Street, will manage the 80-bedroom hotel under the Hilton Doubletree banner. It will feature 87-bedrooms, swimming pool and spa. Although the five-star ambition no longer plays a part, it will be a four-star with all the architectural features retained in what was originally built in 1865 as a gentleman's club on the corner of Sir Thomas Street.

Sanguine is no stranger to celebrity-chef branding in its hotels. Indigo features a Marco Pierre White Steakhouse and the two successful concepts are due to be replicated in Manchester in the next 18 months.

But it is understood Rimmer, 50, who has made no secret of his desire to open up in Liverpool in the past, will take a more active role than White in the running of the restaurant operation.

Architectural features of original will remain

The fashion and textiles graduate opened Greens in 1990 armed with two cookery books, and no culinary experience. Within two years the Guardian claimed Greens to be “one of the most exciting restaurants in the UK.”

He set up his second restaurant, Earle in 2006 and continues to play a major role in both restaurants today, working in the kitchen, training staff and creating new dishes.

Now a household name, thanks to Sunday Brunch and BBC’s Something for the Weekend, he has also appeared on shows such as The Great British Menu, Saturday Kitchen, Grub’s Up and Celebrity Mastermind.