Fancy taking your next foodscapade to the next level? Add one of Liverpool’s most outrageous challenges to your agenda. Will you leave with bragging rights or nothing but a bulging belly? Will you be victoriously crowned or quickly humbled? The proof is in the pudding, as they say, or rather, the 2kg worth of meat, cheese and dough. So, if you think you’ve got the chops to take on one of the city’s most infamous food challenges? Keep scrollin’, scrollin’, scrollin’.

Read on for our pick of Liverpool's best food challenges... 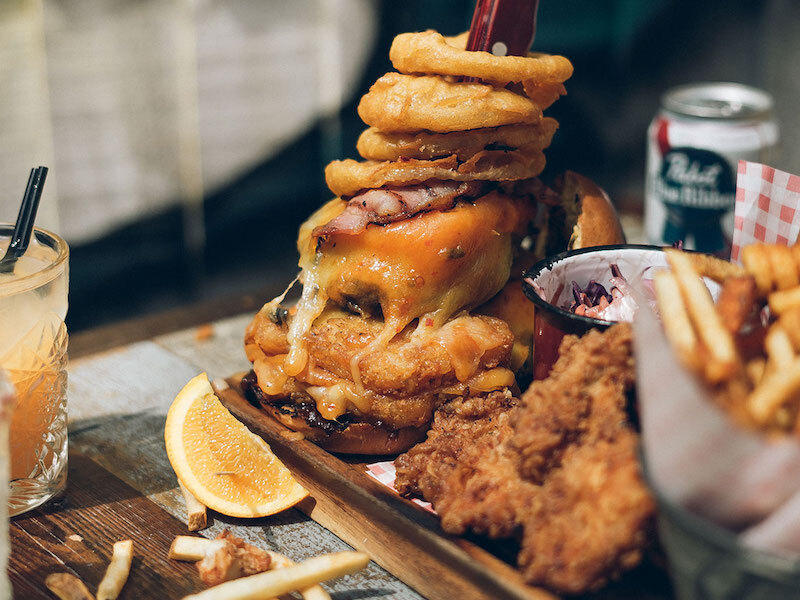 Let’s be real, Patterson’s definitely isn’t known for superfood salads and kombucha. In all honesty, a regular round of orders from this fried chicken shop and burger joint can very quickly start to feel like a DIY challenge. Many a self-induced Patterson’s food baby have we all nursed. However, the menu does feature a couple of feisty food challenges and the one we’ve picked for you is the rather sinisterly-named dish of doom. Two beef patties, famous fried chicken dusted in a secret spice blend, bacon, cheddar cheese, chilli cheese, hash browns and onion rings with a side of fries and slaw. *Pauses for breath*. Eat it all within the 20-minute time limit and dinner’s on them, fail and it will be you left footing the £19.95 bill. 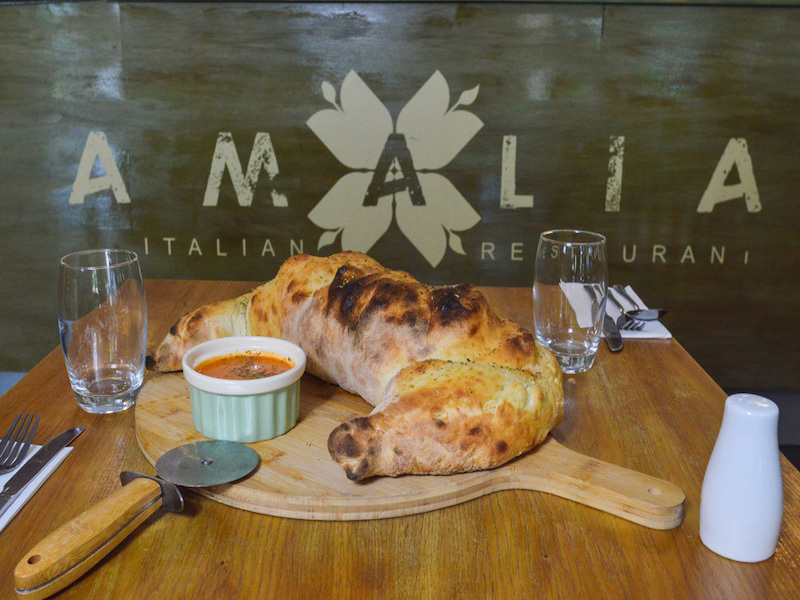 The challenge: The 5lb Calzone

The prize: Free meal and merch

What you might not know about indie Italian restaurant Amalia is that it’s home to the notorious 5lb calzone challenge. To clarify: that’s a giant folded pizza packed to the crimped crusts with cheese, mixed vegetables, mincemeat and tomato sauce, with a marinara dip on the side because lord knows, that’s gonna need some lubricaton.

Now, let’s just put this into perspective for a minute. Five pounds in weight is equivalent to about five footballs, two litre bottles of Coke and one small cat. Amalia describes the colossal calzone as “5lb of pleasure” but that’s enough to make one’s gut groan in pain just thinking about it. Alas, many a brave warrior has descended upon Amalia to tackle the mammoth meal - more than a thousand to be precise - and we reckon you should be one of the next.

The current record is just shy of 10 minutes but if you eat the entire thing in under an hour, you’re a winner, baby. Victory looks like a free meal, a spot on the familia wall of fame and an Amalia t-shirt so you can quite literally say you’ve been there, done that, got the t-shirt (and the matching indigestion). Defeat looks like an £18.95 bill and photos of you hanging your head in bloated shame that will be circulated by your mates on social media for years to come. 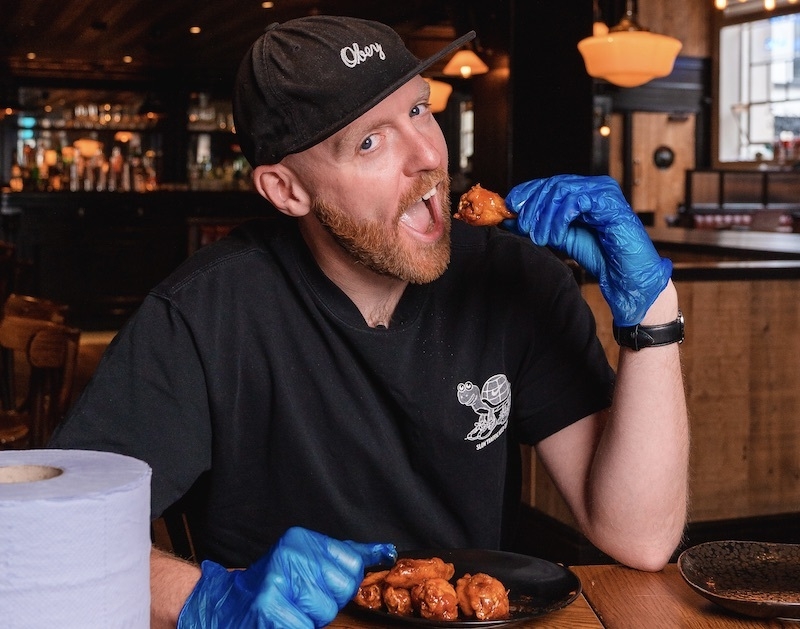 The prize: Lifetime discount at all Red Dog Saloons

The human population can generally be split into two categories: korma or vindaloo. If you’re in the latter camp, you might be interested to know about Davey Jones’s Hot Locker. If you’re in camp korma, head for the hills because this food challenge truly ain’t for the faint of heart. So, what’s inside Davey’s Hot locker, you might be wondering…

Naga. Viper. Chilli. That’s right, one of the hottest chillies in the entire universe - and we’re not even being dramatic. The Naga chilli gets 1.4 million Scoville Heat Units (AKA really f’ing spicy) and it’s smothered all over a plate of six chicken wings and served to anybody willing to take on the challenge. And here’s the kicker: one of the rules of the challenge stipulates no water (or any other beverage) to extinguish the inferno tearing over your tastebuds. Ouch. No wonder it’s dubbed a challenge “only for the brave and foolish”.

Contenders get 10 minutes to polish off the lot. Complete the challenge and you get a Silver Coin that endows you with 10% lifetime discount at all Red Dog Saloons. Be one of the fastest to do it and you’ll find yourself on the Gold Coin leaderboard with 25% off at Red Dogs’ for life. There’s currently nobody on the leaderboard from Liverpool so FFS, will someone go and do it for the scousers? 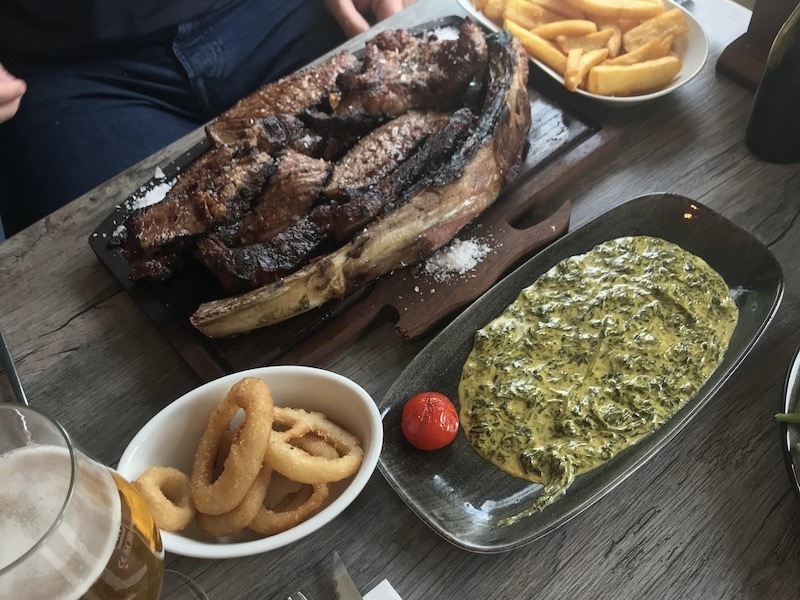 The prize: 10% off, bottle of bubbly, chance to win a weekend break

The Bromborough restaurant’s Tomahawk Challenge involves attempting to eat a tomahawk steak, a starter and two sides in under two and a half hours. Sounds easy, right? Only five people have so far smashed this challenge and earned their place on "The Wall Of Fame". The cost depends on what size steak you have - it’s £8.95 per 100g of tomahawk steak (including two sides.) Legend has it that “Rob” managed to demolish a 73oz tomahawk, starter and two sides in just 44 minutes, and even finished off with a dessert. Go Rob. You get 10% off if you complete it, plus a bottle of bubbly and the chance of winning a weekend break. Take the challenge between Monday and Wednesday and you get 20% off PLUS 10% off if you beat it. The winner of the weekend break will be announced in March 2023, a year after the challenge started. Contender, ready.

Read next: ‘It’s hard not to feel cheated by a singular sausage’ - Dale Street Kitchen reviewed

Read again: Popeyes’ UK customers are queuing at dawn for a chicken sandwich - and Liverpool is next