Location is everything
Old Hall Street, at the heart of Liverpool's business district, has never fared particularly well in the league table of Areas To Grab A Bite To Eat After 5pm. 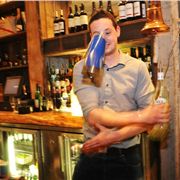 The Pinocchio cocktail
demonstratedWith its plethora of offices and a train station taking workers back to far less bleak and breezy places, it's never really had to.

Back in the 1980s, Sam's Bar on the corner of Tithebarn Street was as exotic as it got, serving chilli con carne and chicken in the basket.

Then there was the very average Italian, Via Veneto, with its monopoly on re-heated catering packs of lasagne. When Tesco Express and Sainsbury's moved in, its role as the middle man – somewhere between chiller cabinet, checkout, microwave and mouth – was over. 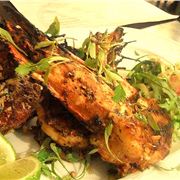 Big shrimpIt's alright for the expense account crew, who are to be found pushing peas around the plate at the Panoramic or Fillini. But the rest have long had to make do with a bag of pork scratchings from the Exchange or Cross Keys.

A buck to be struck
Now, however, people have decided to actually make their homes in the city's top wind tunnel. Yes, it takes all sorts, but with its close proximity to the cruise terminal, not to mention a registry office, one restaurateur has detected a new and untapped market. Enter, City Wine Bar + Kitchen, open from early till very late, seven days a week. 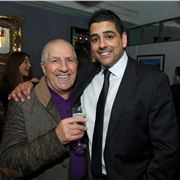 Jaf Siddiqi (right) gets friendly
with the locals (left)North West entrepreneur Jaf Siddiqi is an old hand at running restaurants, but there is northing old fashioned about his concepts: the Viva Brazil chain is one of his, as is Tom's Champagne Bar in Manchester's House of Fraser and Hugh's Champagne Bar in Glasgow.

CWB+K aims to offer “high quality food, cocktails and wine” and is a seven day operation with the fledgling neighbourhood in its catering sights. The venue is the first of two, with another planned on Bold Street for later in the year. If all goes to plan, the concept will be rolled out across suburbs up the East Lancs.

“I love Manchester, but as a market for the leisure industry, I prefer Liverpool,” says Jaf. “It is like a village, people are proud of their city. A lot of money has been spent, the cruise ships are returning and everyone is upping their game.”

What to expect
With its reclaimed floorboards,  muted, Victorian lighting and understated wall decoration there is an unexpected air of rustic welcome about CWBK. The only thing shivering will be the salvaged timbers that make up the bar from a Liverpool ship's wood.

It is distressed and bleached. Happily, on our visit, it was the only thing that was: the aunties in the wedding party across the road had gone elsewhere.

The whole thing looks as if it has stood for five decades, rather than just five weeks.

What's for lunch? What's for tea?
With not a brakes van in sight, CWB+K has got a hint of City Boy London pub about it. 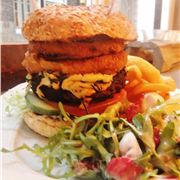 There are make-your-own deli platters and mezze and several good looking salads, of which the smoked duck with candied pecan nuts, orange segments and raspberry dressing (£7.50) is said to be a stand-out.

Who is paying for all this?
Right now, and given the general ambience and service, this is, undeniably, good value for money. At the lower end of the scale, a 7oz rump steak, with flash fried chilli, spring onion and soy sauce and chips or wedges comes in at under a tenner and The City Burger is a very inclusive £7.95. 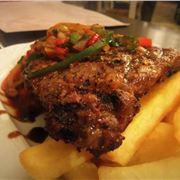 At the top end, giant shrimp (£16) with blackened cajun seasoning, is a classy lloking head turner, and, served with parmesan seasoned wedges, and that fashionable, crunchy, red cabbage coleslaw (sides £2.95), will send you back off to your Beetham Tower crash pad feeling rather more well disposed about your 'hood.

Alternatively....
Nip in with a mate for a couple of huge cakes, like this choccy, fudgy number, and a bottle of wine, starting at £15.50 or prosecco at £19.50. A San Cebrin Tempranillo or San Vitto Pinot Grigio starts at £3 a glass (125ml) with a decent bottle of Pouilly Fuisse or Valpolicella giving you change out of £30. 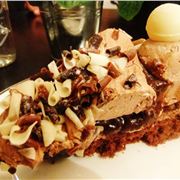 For the very thirsty
Plenty of cocktail action too. Try a Lavender Margarita, English Smash, or City Sunset (£7.50) for “another sweet end to a busy day.” Whether you live miles away or not, by the end of it, you might be.