NOT so long ago, Bold Street’s 'Pan-Asian inspired' Miyagi was one of a new breed of indie-ish eating outlets on the steadily resurgent city centre strip. Tucked in alongside time-served cafes and shops like Maggie May’s and Matta’s, the incoming venues helped Bold Street earn its current reputation as a culinary counter-balance to the chain-filled terraces in Liverpool One.

But whereas the street’s long-lasting names have stood firm throughout endless cycles of economic uplift and not-so-managed decline, it may be that the newcomers are made of flimsier stuff. Having spawned still-standing offspring in Allerton and Ormskirk, Miyagi was wiped off the Bold Street map last September.

Its replacement is Dia + Noche, which opened just before Christmas. With the same owners, but a 'new concept', what was previously a lofty, dimly-lit blue and gold interior is now a little lighter, a little brighter, and designed to encourage all-day brunching and lunching followed by late-night drinking and dining.

According to the Dia + Noche timetable, 'dia' kicks off at 8am with a large menu of breakfast and brunch dishes from the American, European and Full English traditions. Lunch options are available from midday, with the 'noche' selection of tapas and main courses on the go from 5pm.

We arrived just as dia was blending into noche, so were able to unlock the evening menu with its mix of Mediterranean morsels and international staples. An unseasonable burst of Costa Blanca-style sunshine meant the city was giddy on ultraviolet rays, and with its folding façade flung wide onto Bold Street’s sweaty bustle, Dia + Noche felt like a cool, calm sanctuary in which to usher in the dusk.

Being in the mood for something heftier than a few light tapas, we treated the small plates as a selection of starters, followed by 'proper' main courses. We also added a bowl of blistered, deep green Padrón peppers (£2.95), never finding a hot one but enjoying the soft salt-flecked bitterness all the same.

Pan con tomate (£2.50) was over-salted and under-flavoured, with finely diced tomatoes that were merely cold and wet rather than bursting with the taste of the sun. The dish’s simplicity is part of its attraction, but the emphasis needs to be on the “pan” and the “tomate” otherwise it’s just a “con”.

A nugget of pearlescent monkfish (£7.50) served with a brittle shard of Serrano ham and a smear of pepper sauce was a happier mouthful, though it was a bit of a wallet-buster considering the portion size. A snotty dribble of fruity discharge, presumably the apple jam mentioned on the menu, added a sharp edge that helped give the under seasoned fish a little extra life.

The honey grilled halloumi burger (£8.95) was a good fistful, with the thick slab of salty cheese twinkling in the sunlight thanks to its golden glaze. The salad leaf and slice of pale tomato were perfunctory, but a juicy Portobello mushroom added satisfying ballast. The handful of wedge-style chips were fluffy and crisp, and the portion of red cabbage slaw  – 'autumn slaw' for a heatwavey spring day – was creamy but still light.

Chicken ballotine (£9.95) stuffed with prunes and pistachios had a pre-formed works Christmas do look about it, and the generous glug of wintry gravy didn’t help. Although there was no sign of the advertised Serrano crisp (maybe I got the last one with my monkfish) the chicken and its dark fruit core were a happy combination. Spindly roasted carrots, a few tendrils of broccoli and a dollop of root veg mash were all excellent.

The handful of desserts included a crème Catalana (£4.50) and a Tres Leches cake, plus the rather less Iberian waffles with salted caramel ice-cream (£4.50). They were pillowy and light, simple but decent. The cake seemed initially perfect, oozing under pressure like a cherry-topped bath sponge, but the cake’s core was too dense and dry, in need of a little extra soaking.

As evening encroached and post-work drinkers arrived to wash away the unexpected heat of the day, Dia + Noche’s mood began to shift, with lowered lights, glowing candles and, eventually, those tall front windows closed against the breeze. How long it will play its part in Bold Street’s current story remains to be seen, but for now, its hit-and-miss dishes and relaxed-enough charms may as well enjoy their time in the sun. 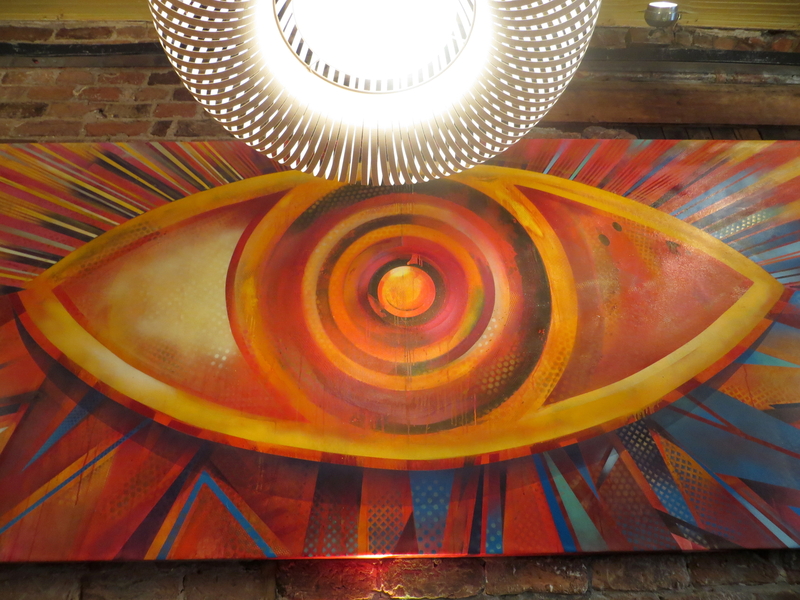