A rain-swept Dale Street does nothing to deter the queue of couples waiting to try the “BEST FULL ENGLISH BREAKFAST IN ENGLAND,” which, in case you forget, is plastered at the top of the menu on the front door. Dale Street Kitchen & Bar seems to have adopted Big 7’s compliment as their official slogan: it repeats itself on the QR code menus, and even on the card that comes with the bill.

I could’ve doubled-up for an additional eight quid, but does anyone really want four eggs?

Inside, a Scandi-style décor, peppered with black and white snaps of Scouse miscellanea (including the seemingly obligatory “what this street looked like a century ago” photograph), clashes slightly with the playlist.

Over the clatter of knives and forks, Thriller and Video Killed the Radio Star sound jarringly out of place. Whoever controls the Spotify clearly didn’t get the memo of classy all day brekkie and went for boozy bottomless brunch instead. We’re led to a window seat with a smug view of slower-to-rise breakfast-seekers who are forced to wait outside.

I go for the classic English breakfast (£11.90) It’s hard not to feel cheated by the singular sausage on a breakfast that costs the best part of twelve quid. The mushrooms leave a lot to be desired, giving the impression of batch-cooked hotel buffets, and the hashbrown could be crispier – shortcomings I might forgive for under a tenner.

The sausage, lonely though it is, is porky and golden (as promised on the menu) and the bacon has been crisped to perfection. I chose fried eggs and am grateful for the runny yolks so I can soak up the slab of white toast which dominates the right side of the plate. The star, however, is the innocuous-looking circle of black pudding, which is equal parts earthy and crumbly, but it joins the sausage in the ranks of components I wish I had more of.

I could’ve doubled-up for an additional eight quid, but didn’t fancy spending just shy of £20 for the privilege – and does anyone really want four eggs? It’s a prettily-arranged rectangular plate that creates the illusion of quality over quantity, but lacks the execution to back up that claim.

I interrupt each mouthful with an envious glance at my partner’s triple-stacked steak sandwich (£11.50). After a few not-so-subtle hints, she relinquishes a bite. Tender beef, creamy mustard mayo, and the need to unhinge my jaw to get my mouth around it – what’s not to like? It’s the single outlier in a sea of bacon and beans and I can’t help thinking everyone else here is missing a trick, myself included.

By now, the coffee and smoothie are long gone, and we find ourselves in need of a couple of boozier pick-me-ups. My Bloody Mary (£7.50) tastes so strongly of olives I wonder if it wouldn’t be easier to just drink from the jar, but in my book that’s a good thing. Heavy on the spice and light on the tomato juice, this hangover cure gets another big tick from me.

My partner’s mimosa (£6) is the perfect palate cleanser. It boasts freshly-squeezed orange juice and has the pulp to prove it. It’s a strong finish to the meal, but the cocktails come a little too late to make up for the slightly underwhelming breakfast.

When it’s marketed so zealously as the best of the best, Dale Street Kitchen & Bar can’t help but set you up for disappointment. It’s reminiscent of a film your mate won’t shut up about which, when you finally sit down to watch it, inevitably fails to meet the over-hyped expectations. All in all, it’s pretty good scran, but the best full English breakfast in England? Just a sausage short. 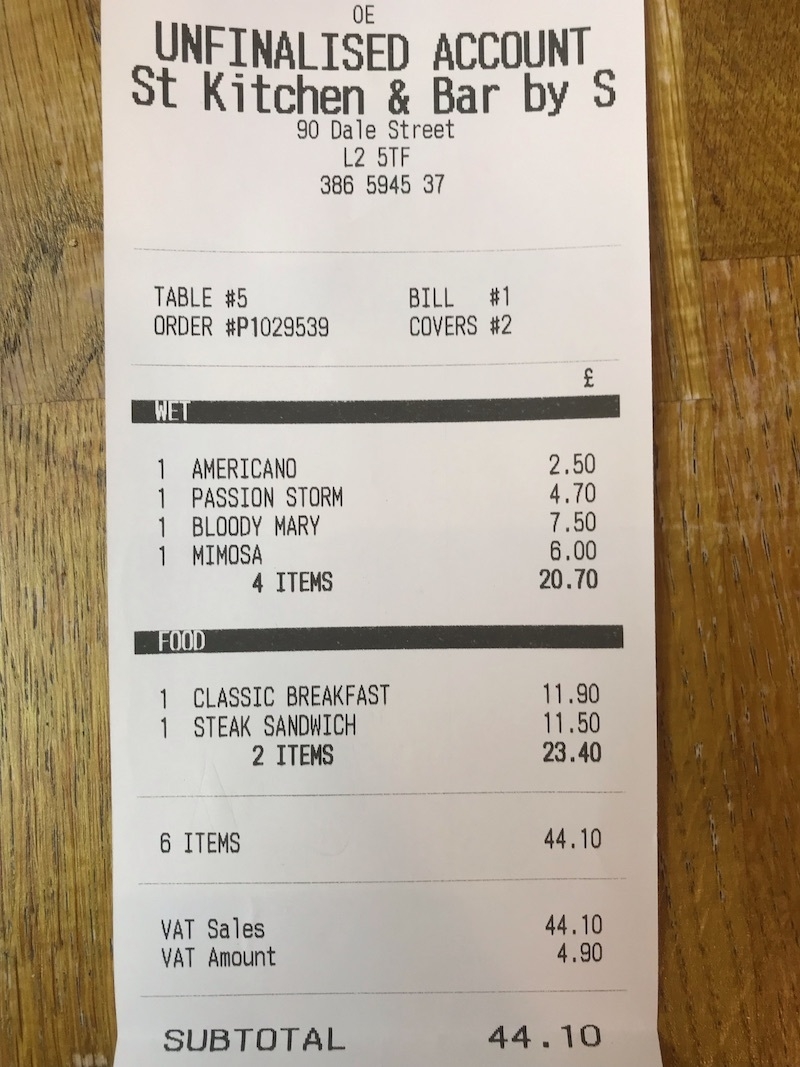