There’s a general absence of French restaurants across the North West, but Liverpool is, so it seems, sorting this out. French cuisine, for this writer, is the best in the world.

When you stick to the rules.

Liverpool Confidential’s editor mentioned that she was witnessing a renaissance of French restaurants in her manor and had written a piece on the subject, mentioning Bouchon, part of the small Liverpudlian chain that includes Bacaro, one of this writer’s favourites.

Matt Walsh, the chef, opened the place some years ago to great effect; I scored his scallops with a 10/10, they were so good. Matt is still with the Red and Blue group, nowadays as a full board director.

The owners are the restaurateurs Paddy Smith and Jonathan Poole. They’ve got good pedigree and the pair have, over the years, delivered Salt House Tapas, Hanover Street Social and the afore-mentioned Bacaro, all of whom are Confidential favourites.

So, I was looking forward to this recently opened punt at French cuisine.

Bouchon is a dream site for restauranteurs, situated on the bend on Castle Street. It’s cutesy French. Tables and chairs outside could have been stolen from Montmartre, looking the part.

I sat outside on a bit of a glum day, to get a (very good) coffee to kick start my brain and in a state of excitement, asked for the menu. It included a burger. And a sticky toffee pudding. Hmm.

It did have pork rillettes mind you. And black pudding. And cassoulet. And scallops, or indeed, scallop. And oysters. Oooh yes, oysters. And it had tarte au citron and apple tarte tatin with vanilla ice cream.

Let’s start with the oysters, we had half a dozen for £13. They went down as a sea-salty mineral treat. Great value, well shucked.

Rillettes, pork or duck - I’m a fan, particularly when generously served hewed from a big slab out of a broad, deep terrine. Fatty, sometimes a whiff of juniper, always highly seasoned. Crusty, white bread, fresh that morning from the 156-year-old bakery next door, a rough local red to wash down.

Sadly, not in Bouchon it’s not. Pork rillette, dill pickle relish, crisp breads (£6.50) had bugger-all to do with French cooking. Every farmer’s wife from Gascony to Paris would have split their sides laughing.

"Crisp breads". What in the world are these doing here? You know those machine-produced, little round dry horrors you get in ‘grab bags’ in Polish supermarkets? These were worse.

This was the poorest iteration of the French classic I have ever had, anywhere in the world. Fat on top of fat, on top of fat. It was inedible. This dish had as much personality as an accountant about to retire after 35 years’ service in a sock factory.

But, ladies and gentlemen, very Instagrammable. In other words, pretty. Which is not what this dish is meant to be about.

If that scallop was a sentient being, it would have buggered off to the toilette weeping with shame.

It was like a tomato sauce where the tomatoes hadn’t been cooked through. It had no crusty crumb on top. But the black pudding was slapped on again. I suppose that’s why there was an apple compote with the dish. WTF?

Confit duck leg, peas, onions, lardons, dauphinoise potatoes (£16). The duck should have the skin crisped, having been finished with its own fat in a frying pan; the meat should be able to have a straw pushed easily through. This duck was scoring well on those two requirements.

Then, maybe Lyonnaise potatoes, or simply fried, sea-salted potatoes cooked in the duck fat and a lovely green salad with a sharp, vinaigrette last-minute dressing. But, someone thought it a good idea to drop it on top of a soup of potato chunks in cream, with lardons wallowing about and a few baby onions. A splash of dark sauce on top. I genuinely have no idea what that was.

Cheese (£9), described as “boss” on the menu, was ordinary. The vanilla creme brûlée (£5) was great.

Apple tarte tatin, vanilla ice cream, (£6) was drab. Boring. Unexceptional. The pastry, normally crisp and buttery, was like wet, warmish cardboard, the apples flabby with little if any caramelisation, certainly no hot, dark and sticky caramel oozing onto the plate. The ice cream refused to melt through embarrassment.

Service was fine given everyone has had to take on young newcomers to fill the gaps.

The wine list was useful. Our Uva Non Grata, (£26) a Gamay from around Lyon, was unusual and lovely. The wine list does not publish the vintages, a practice which allows the Del Boys of the restaurant world to pass all the crap onto us punters at not-crap prices; I do however believe that this usually trustworthy management team aren’t of that ilk. It’s just being bone-idle.

This restaurant has left me baffled. It’s as though the menu has been formed by a committee that includes a couple of traffic wardens pulled off the street to have their say. I can’t believe anyone on the committee has been to France or spent any time studying anyone from Escoffier through Elisabeth David and on to the Roux family. This is cooking for fools.

One thing that is uniform is the presentation. It’s all very Instagrammable. It’s as though someone has told these guys to forget the idea of the balance of French cuisine. If it’s piggy, we’ve got to stuff a tutu on it. No, you don’t guys. Stop this nonsense immediately. Please. Stop it. 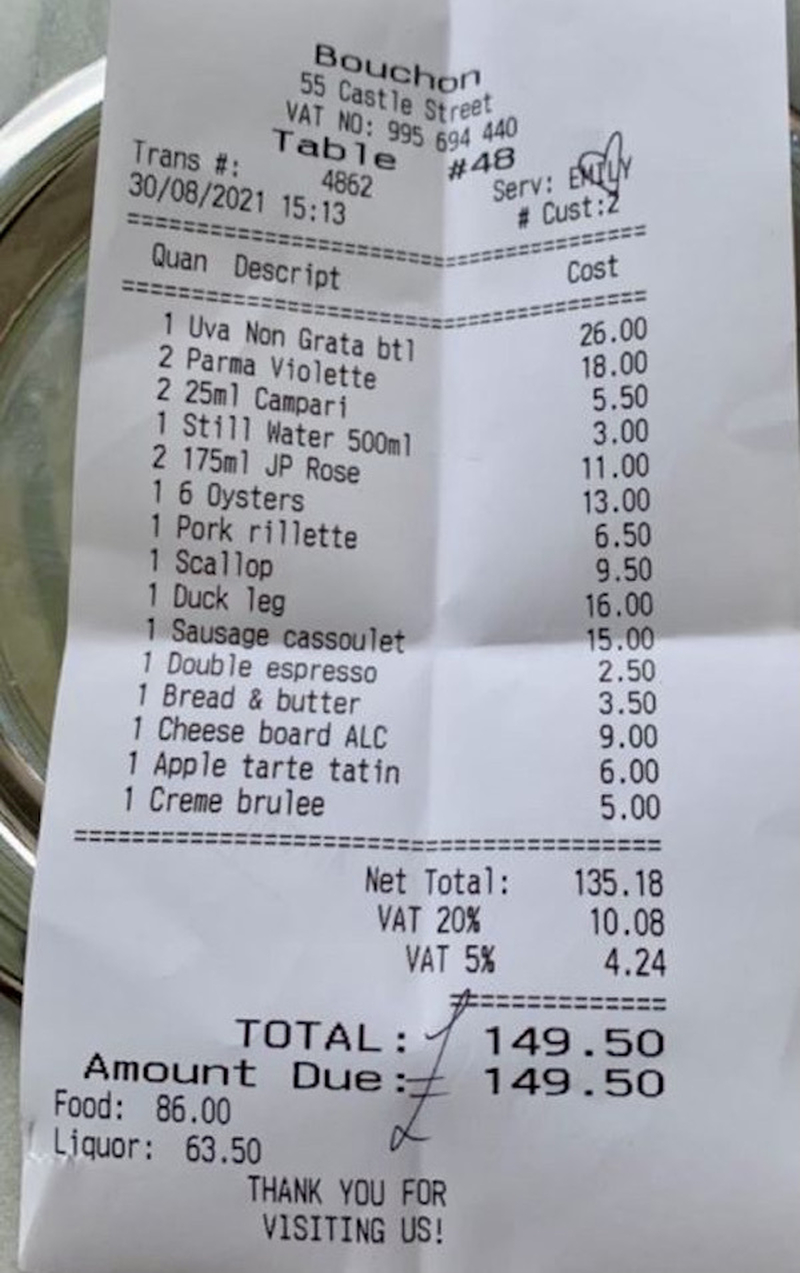