Why are women silent marching in Manchester? 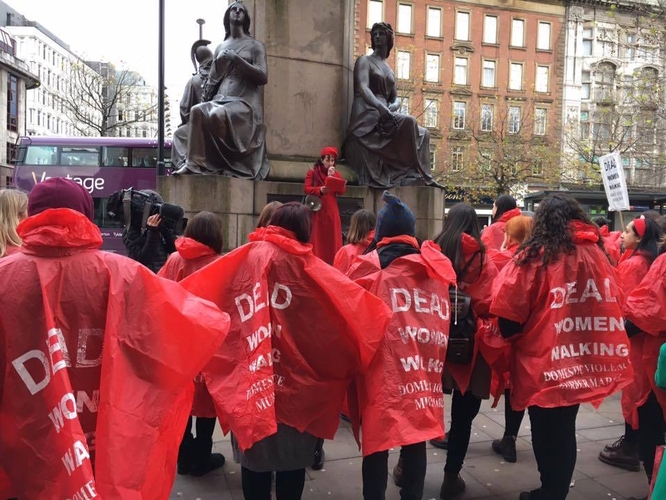 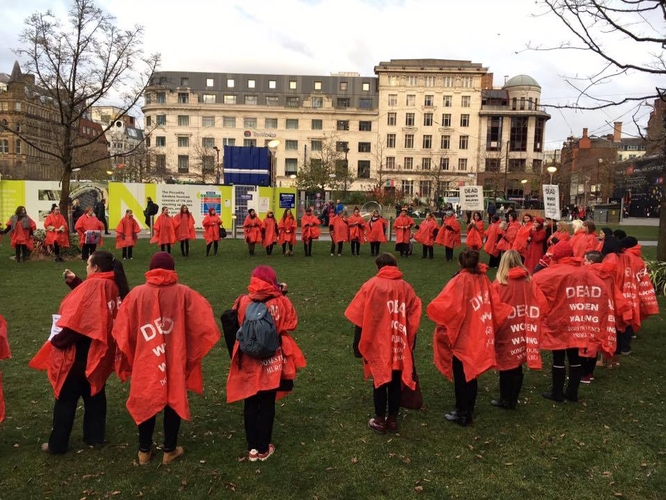 A procession of silent women draped in red snake through a bustling city centre. You’d be forgiven for mistaking this for a scene from the Handmaid’s Tale. But, whilst the peaceful march is far from the dystopian realm of Margaret Atwood’s masterpiece, the purpose still derives from sinister origins.

This is the ‘Dead Women Walking’ march, a respectful protest that raises awareness of domestic violence in the UK. Each woman walking represents a woman that has been killed at the hands of a partner or ex-partner.

In the year to March 2017, 1.9 million people in England and Wales – 1.2 women and 713,000 men – experienced domestic abuse, according to the Office for National Statistics. Two women are killed every week in England by a partner or ex-partner.

The Manchester march is designed to highlight the names behind the statistics, offering a powerful visual reminder of the victims these crimes claim. The names and ages of the women who have been killed by known men in the past year are read out during the procession.

Volunteer and march coordinator Claire Moore hopes that the march will bring the tragedy of domestic violence to the forefront of public attention.

“Often we’re disbelieved. People are suspicious - what did she do to deserve that. The fact that in a recent rape trial it was suggested that a teenager was asking for it because she was wearing a thong - these things are being said in open court. It’s 100 years since women [with property] won the right to vote and we’re still getting this type of attitude. It has to stop.”

Though Claire has not experienced domestic violence personally, she is passionate about raising awareness and refers to the women affected unanimously to show solidarity.

“I get the usual comments of ‘oh it’s just feminists having a go’ – but we’re not talking about wolf whistling. We’re talking about abuse, assault and murder.”

Despite a generally positive response to the march, Claire admits that attention from men’s rights groups has discouraged her from openly publicising the start time and location of the march.

“Many of the women that take part are domestic violence survivors and the last thing I want is men’s rights activists harassing them.”

“Generally, the response in Manchester is very positive. I got heckled doing a speech the year before last – someone was trying to shout me down, but we won’t stop.”

“The women that take part find it very emotional but cathartic.” 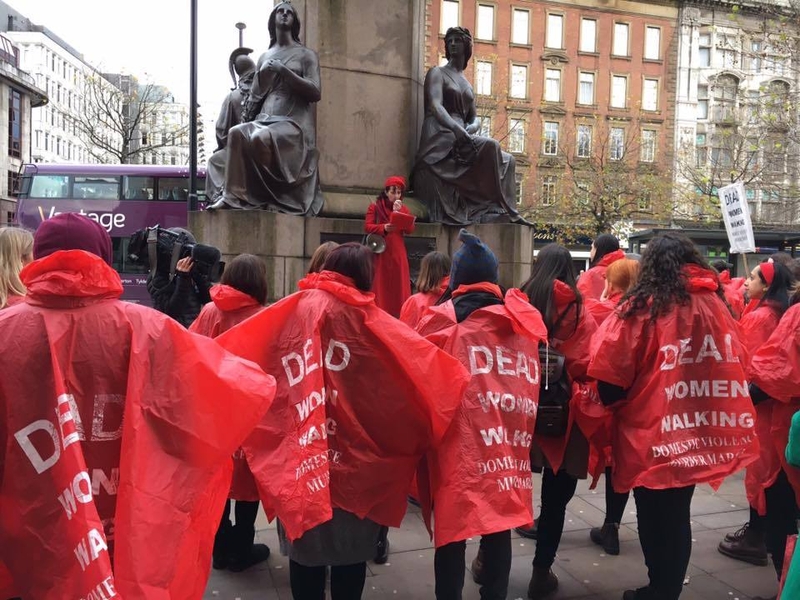 The march is exclusively for women, with women stewarding themselves. Though previous men’s groups have offered to support with stewarding, Claire believes it is important to promote the message of women protecting women.

“The idea is that we as women are representing the women killed.”

As often happens with women’s rights movements, critics have questioned where the support for male abuse survivors. But Claire is clear that the campaign supports women only and rightfully so.

“It’s like challenging the breast cancer society for not raising awareness of prostate cancer – they’re two completely different things. Yes, men suffer domestic abuse. But women are five times more likely to fear for our lives and to be murdered than men.” 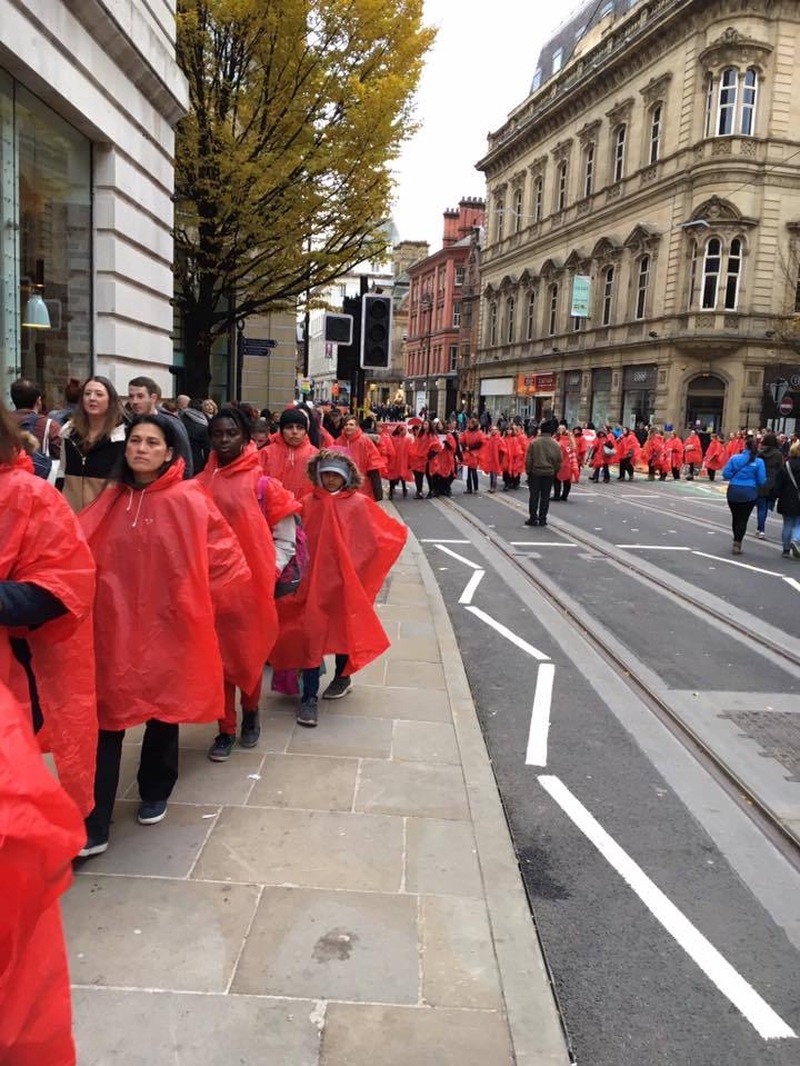 Claire believes that more careful reporting of domestic violence crimes could help to alter perceptions in the media.

“We have to change the words we use. When people cite an affair, stress or depression as motives – these are just excuses. We ned to stop using men’s excuses for murder as a reason. Depression and mental illness is always used as an excuse. But if you have a mental illness, you’re more likely to be a victim than a perpetrator.”

“As a society, sadly women are often blamed for their suffering.”

“People need to be domestic abuse aware and understand how to correctly report on these crimes. Using testimony from the court case in reporting is obviously important – but the use of headline that you use is your choice. The ones I’ve seen over the years have been shocking. ‘Woman’s affair cost her her life’ (Western Daily Press). The use of the phrase ‘The puppy farm murders’ to describe a case where a man killed his wife and daughter on a puppy farm – victims are often left out of the headline altogether. The headlines sensationalise the cases.”

Whilst there is support for domestic violence victims, funding cuts have put a strain on services.

“The problem is that they’re massively being watered down – refuges are being closed or tendered out. Women are not lightbulbs – you tender out a service, you’re not just replacing lightbulbs in a council building, you’re removing specialist services that are still needed and that women have fought for years to get access to. It seems to me that over the last five to ten years services are being eroded.”

“One thing that I see time and time again is that women have reported abuse to the police and it hasn’t been picked up on. Every time it happens, we hear that ‘lessons will be learned’ – but when?”

The Dead Women Walking march sends a message – that women experiencing domestic violence are walking the streets until the lessons are learned.