Mindful Meditation: Self Help Fad Or Cure For Anxiety?

“If you come to find yourself in a difficult situation, breathe consciously,” whispered Kavyasiddhi, the meditation teacher on my first class in the serene shrine room at the Manchester Buddhist Centre, Northern Quarter.

Meditating wasn’t as easy as I expected. Your thoughts become louder without constant everyday distractions. And, there is no stereotypical 'ohhhming', which disappointed me.

It’s not deathly quiet; the city centre outside is bustling at peak time. Cars passing by beep, the floors above creak, phones sometimes vibrate, but the room remains still, full of motionless people attempting to achieve mental calmness and focus through Buddhist mindfulness. 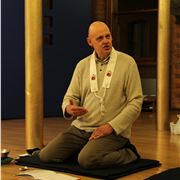 Chandana“Mindfulness is a mental state,” explained Buddhist teacher Chandana before my session. Speaking to me with a hushed baritone, Chandana is poised, somewhat reserved, exuding an otherworldly peacefulness many associate with Buddhists.

“It’s about being in the present moment and allowing a person to focus on what it is to just be, not just do.

“Meditation gives you the opportunity not to interact, in an age where everyone is incessantly interacting - whether it’s on phones, laptops or with the television. We’re being force fed information daily - much like geese fed before slaughter. It becomes too much and our minds are undisciplined as a result.”

None more undisciplined than my own wandering mind. As a fidgety coffee guzzler and social media obsessive, I am a perfect example of the generation Chandana speaks of, struggling to focus on one task, stressed with ambition and dangerously anxious as a result.

“We spend most of our waking lives trying to achieve something, but there are no goals here. If your mind wanders in and out of the moment, that’s fine. Mindfulness is about you and acknowledging the thoughts that creep in and then taking yourself back in the moment.” 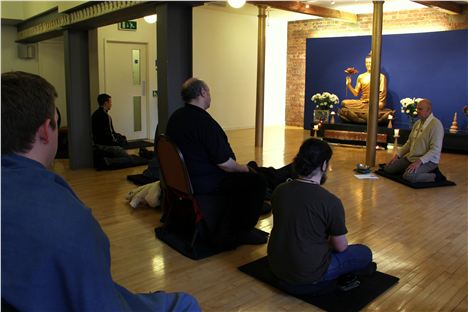 As I sat uncomfortably cross legged on a mat my mind raced with day to day goings-on. Deadlines, emails, I even began writing this in my head. My ankles and knees ached and I had cramp in my calf. I opened one eye to see if anyone was just as restless – they didn’t seem so. Everyone else’s focus made me completely aware of myself and every shuffle I made.

Meditating wasn’t as easy as I expected. Your thoughts become louder without distraction. And, there's no stereotypical 'ohhhming', which disappointed me. 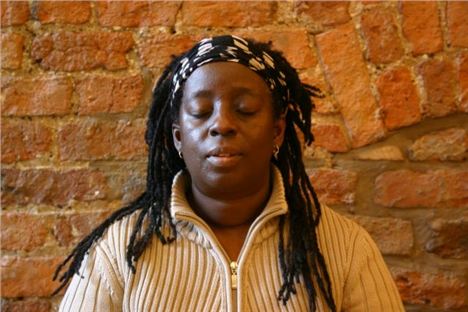 Bringing us to with gentle bangs of her cymbal, Kavyasiddhi allowed us to stand up and 'shake off our legs' - which I've always preferred attached.

“The purpose is not to be in pain,” she urged. With that I found a far more comfortable sitting position ready to try again.

“Your body is like a mountain and your mind the sky above. Sometimes there’s clouds but sometimes there are moments of brightness,” said Kavyasuddhi.

Right. If that’s the case there's thunder and lightning crashing in my head.

I did, 40 minutes or so in, begin to settle down and feel the benefit of the experience.

I realised, much like all our electrical devices, we sometimes need to power down. There is a great relief not being at the complete mercy of a mobile phone. 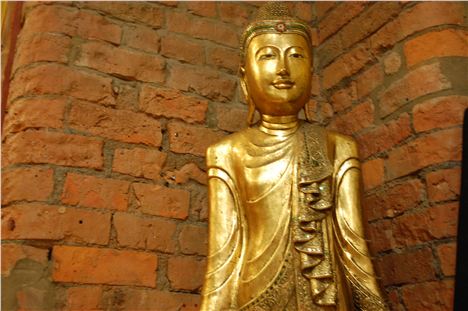 Last year it was reported that one in five Britons are dealing with anxiety. So much so, the Buddhist practice has even been approved by the NHS as a technique to help depression sufferers.

Its popularity and supporters have grown, not necessarily of Buddhism, but the mindfulness practice in its own right.

Even so, some have deemed mindful meditation as new age mumbo-jumbo and a fleeting fad, a worry for Manchester Buddhist Centre. They want to ensure that the ancient Buddhist practice is not confused with any new-age alternative.

Are sceptics justified in disregarding meditation as a sole cure for anxiety and depression?

Well, there are many scientists who back meditation as a technique to promote mental wellbeing. In 2010 University of Manchester studies showed that regular meditiation reduces ‘the emotional impact of pain’. Other studies show that mindful meditation can lower blood pressure, help people make better decisions within the workplace and lower anxiety.

With so much research into the technique, there's surely no harm in giving it a bash, even learning a thing or two along the way. 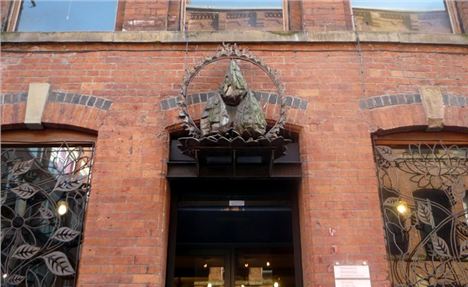 Regardless of your spiritual or personal stance, meditation is worth a try, even if you're just curious. You can buy yourself a little buddha, there's a vegetarian café downstairs, the building is warm and inviting, as are the softly spoken buddhists on hand if you have any questions. 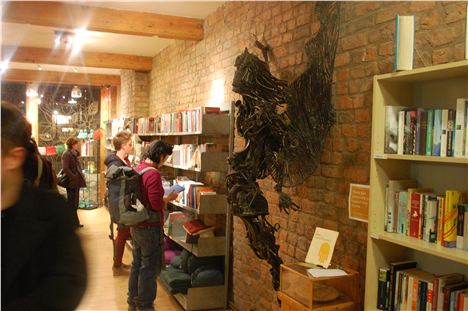 Thankfully, no-one tries to sign you up or shove flyers in your face preaching eternal damnation. You don't even have to be (or pretend to be) a buddhist to try the mindfulness class. There is a collection box, however.

Chandana shook his head: “No you don't have to be Buddhist. Many join our classes. Buddhist practices have been seen as a refuge for the crazy world we’re in. Buddhism teaches you about the human experience and understanding human suffering.”

Applying eastern teachings to our self-inflicted modern western ways does at first feel incredibly self indulgent. Yet, at the very least, the 'mindful revolution' encourages you to examine the state of your mental health. One mindful step at a time.