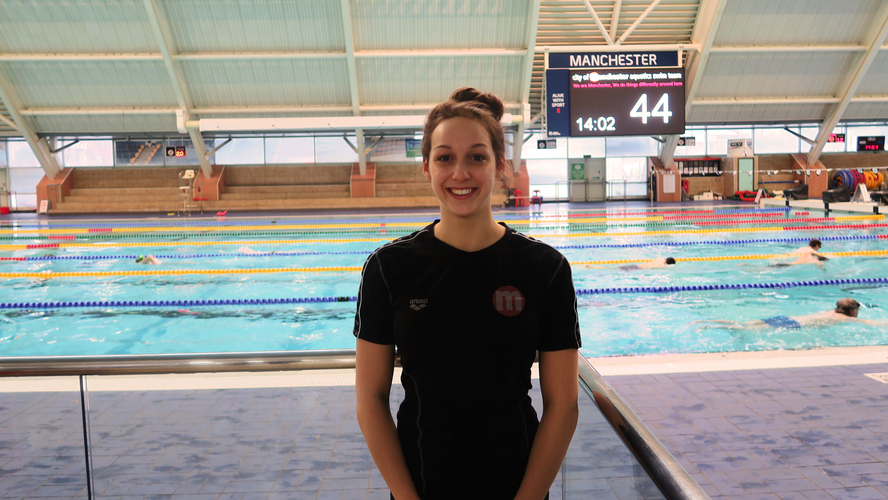 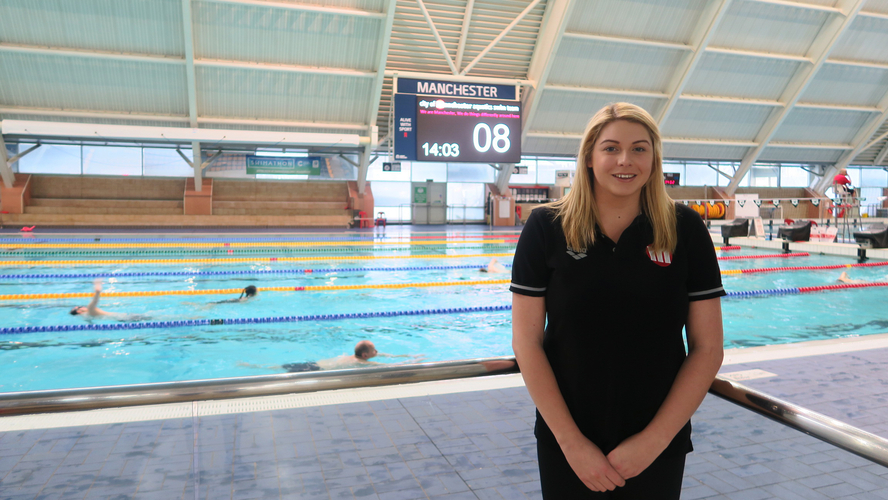 Flashback to your university years and chances are it’s a disorganised swirl of studying, partying and learning to fend for yourself. Mismatched meals, hangovers and excessive workloads are common complaints of the student lifestyle that most would admit to. Now meet Chloe Golding; the nineteen-year-old MMU student who juggles a degree in Sports Science alongside nineteen hours of weekly swimming sessions followed by gruelling gym workouts and a weekend job teaching swimming to kids. To add extra pressure to her already bolstered workload, this year Golding will join the England team and make her debut at the Commonwealth Games.

So, it’s safe to say that Golding is not your average student.

“It’s always been in my plan to make it [to the Commonwealth Games] so I’m glad that I’ve made that step,” Golding explains calmly. I meet her and her Sports Scientist and Coach Abi Clarkson at Manchester Aquatics Centre, which has been Golding’s training ground for the past eighteen months. “I’m excited about it. I’m trying not to get too over-excited though - I just want to try and treat it like I treat any normal event and not worry about it too much and do what I normally do as that works.”

Golding has qualified in the backstroke events after an unexpected victory at the Swim England National Winter Championships saw her win the 200m backstroke with a PB 2:09.93.

Sports Scientist and Coach Abi Clarkson will also be attending the games for the first time to analyse the performance of competing teams, collecting crucial data which will be used by Swim England to train athletes ahead of the 2020 Tokyo Olympics. Clarkson currently works alongside Olympic and Para Olympic Coach Mark Rose to tailor the training programme for Golding’s and other athlete’s needs.

Encouraging more women into sport has been high on the agenda since Sport England's research revealed that two million fewer fourteen to 40-year-old women take part in sport when compared with men, despite the fact that 75% say they want to be more active. Following the 2016 launch of the This Girl Can campaign, things did improve; the campaign is credited with getting 1.6m women exercising, with the number of women playing sport increasing faster than the number of men. However, men are still reportedly more active than women according to the most recent Active Lives Survey. Whilst women are more likely to take part in fitness activities and classes, the gender gap is more pronounced when it comes to sport itself.

For Golding and Clarkson, there are plenty of strong women inspiring change in this demographic.

American competitive swimmer Ledecky is a five-time Olympic gold medalist and 14-time world champion (the most in history for a female swimmer), whilst Spanish Olympic Swimmer Belmonte is widely considered to be the greatest Spanish swimmer of all time.

“I really like the grit and determination that those two athletes have. More and more female athletes are getting to that [level]. It’s not just swimmers; cyclists, rowers and endurance athletes – the mental barriers that they have to break, and are continually breaking is really inspiring.”

“For me, the work that Melanie Marshall is doing with Adam Peaty down in Loughborough is phenomenal,” Clarkson explains. “She is the best coach that we have in Britain and she’s female – which is great in such a male dominated sport. It’s great to have such a strong female role model.”

Marshall is a former British swimmer-turned Coach who was named Coach of the year in 2014 for her work with Olympic Gold Medalist Adam Peaty. Marshall will be joining the England team for the Common Wealth Games, so Golding will also benefit from her coaching.

The importance of creating equal opportunities for women in sport has been widely recognised by Sports committees. The 2018 Commonwealth Games will be the first major multi-sport Games to offer an equal number of medal events for men and women (133 women’s events; 133 men’s events; 9 mixed/open events). Another history-making first will see at least 50% of the technical officials presiding over the activities being female for Basketball, Hockey and Swimming. For the 2020 Olympics, the 800m freestyle, a previously female-only distance, and the 1500m, previously a male-only swimming race, will be opened up to the opposite sex, demonstrating an ongoing drive to balance opportunities for men and women in sport.

But whilst improvements have been made to level out opportunities at competition level, further work needs to be done to close the gender disparity when it comes to sports leadership. Women account for only 30% of the coaching workforce and this proportion drops to 17% of qualified coaches and only 12% of highly qualified, according to Sports Coach UK.

“Sports leadership is typically male dominated,” explains Clarkson. “Although there is a lot of work being done in sport to change this. Again, having strong role models like Mel [Marshall] challenges the gender imbalance to change. In fact, we’ve got an extra female coach coming with us to the common wealth games – Amanda Booth - and that’s through a women in sport initiative.”

Booth was selected to join the team through the Women’s Coach Internship Programme, an initiative launched by the Commonwealth Games to provide more opportunities for fully integrating female coaches into coaching teams for the Gold Coast.

“You can still look around the poolside and see that it’s still dominated by men," comments Clarkson. "But it’s great to see that head coach roles are being taken up by women."

Both Golding and Clarkson relocated to Manchester to pursue their sports goals and agree that the city has offered ample opportunity for success. Golding is currently receiving a sports scholarship at Manchester Metropolitan University, a programme that supports her development through sports science services, physiotherapy and psychology as well as help with funding. For Clarkson, Manchester has been crucial in shaping her career.

“If I wasn’t with the City Of Manchester Swim Team (COMAST), I don’t think this opportunity would have come about for me. I think it’s opened so many doors and allowed me to take further steps in my career. I’m really thankful to the Manchester City Aquatics for the opportunities it has created for me.”

The Commonwealth games take place on the Gold Coast, Australia on 4 - 15 April
Follow the games here