I’m confused as to why Protein World is getting the brunt of the pro body-image backlash. Why are they getting publicly bollocked?

After all, the notion of the perfect beach body isn’t exactly a novel concept. Yet with a 44,000 signature strong petition and countless tweets later, we’re all talking about what getting 'beach body ready' truly means.

Is the campaign offensive enough to justify the 216 complaints to the Advertising Standards Agency? Are women pissed off because the advertisement objectifies them? Or are they vexed because it perpetuates an unrealistic expectation on women to drink nothing but protein shakes to accomplish abs of steel, slender legs, perky boobs, and a peachy behind? Is this concept of beauty a universal standard? Or is it an unrealistic and unattainable body image for the majority of real women?

I think it’s about the people taking back their own perception of what it means to be confident in your own skin.

‘Shed your winter weight’. ‘Get bronzed before you hit the beach’. ‘Sculpt your body ready for summer’. We are surrounded by media messages urging us to pursue perfection. Perfect skin, luscious locks, and a body that conforms to today’s body ideal.

The main retort from the ad is who dictates beauty and what should a 'beach body' look like? 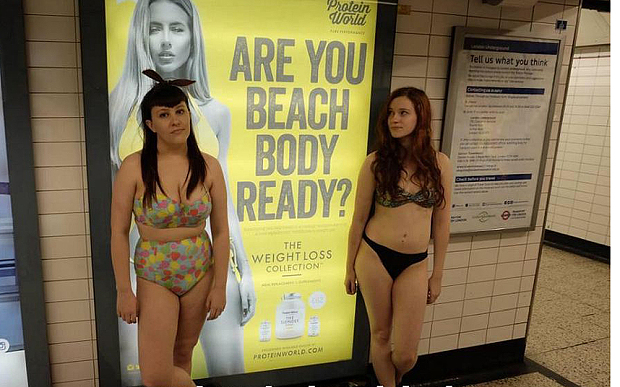 Let's weigh it up.

Is it the media, and their relentless conveyer-belt of airbrushed images of the rich, thin and famous? Or is it the companies like Protein World who present us with bronzed blonde bombshells within the ‘healthy’ BMI range whilst we’re eating our McMuffin on the tube? Whichever it is, we’re influenced by these images. Either we are influenced directly and spend an extra 30 minutes on the treadmill, or we’re forced to listen to our friends and colleagues complaining about reducing their spare tyres that took up residence around their waists for the winter months.

Or are celebrities the ones that dictate the body ideal of today? Cast your mind back to 2006 when the media was dominated by images of skeletal Bratz doll-looking celebrities: Lindsay Lohan, Nicole Richie and the Olsen sisters. Fast-forward to 2014. Kim Kardashian, one of the most identifiable women in the world, has tits, child-bearing hips, and that ass. Countless women and armies of men would say she’s beautiful, curvaceous, and guess what, she even has cellulite. Shock. Horror. In 2006, magazines would have called her fat. Katie Hopkins would have called her a ‘chubster’. Katie Hopkins would have been as wrong then as she is now (at least her idiocy is eternal).

At the same time, while fully supporting women and their right to champion their own perception of body confidence, I’m confused as to why Protein World is getting the brunt of the pro body-image backlash. Why are they getting publicly bollocked? Special K encourages women to eat cereal for two weeks to get in shape for summer, and I don’t recall ranting sessions amongst my friends on a Friday night about their bikini diet campaigns.  The only difference between Protein World and the front pages of our favourite women’s and men’s weekly magazines is that our magazines’ images issue a silent message whereas Protein World have told us we’re fat bastards and need to lose weight. Well, that's how it read to most. Either way, I think it’s damaging to single out an individual company and fire all our frustration in one direction.

Yet perhaps it’s more to do with the callous tweets of the CEO of Protein World in response to the adverse attention his campaign received.  Protein World have been bold in their #getagrip hashtag, dismissing the comments of their adversaries, embracing the support of [not really] celebrities like Katie Hopkins and her tweets that ‘Feminism isn’t an excuse for being fat. Eat less, move more’.

The company have simultaneously caught the attention of the body conscious and reported an increase in profits. It's the age old cliché: bad publicity is good publicity.

On the flip side, those of the body confidence anti- Protein World camp are planning a mass demonstration at Hyde Park, a mass movement ‘taking back the beach’, encouraging all people to come and show their support for beauty dictated by the people.

This entire row isn’t about 'fat feminists' hating on balding overweight male CEOs who tell them how to look. It’s about people expressing what they think is beautiful, and not being afraid to challenge a body image that to them is unattainable. Let’s be real for a hot minute.

How many of us have gained and lost weight, either deliberately or because work has been so stressful we forgot to eat lunch? I bet you know when your own body is looking on point, or you’re having a ‘fat day’. The important bit is YOU know. You know your own body and the only person whose opinion that matters when it comes to your own body is yours. It’s about changing what you want to change, accepting your imperfections, and owning your own image.

We’ll always be surrounded by different perceptions of beauty, but body confidence is about being bold enough to say ‘Yeah, and what?’ when faced with some new fad diet or advertising campaign trying to shame you for having a real body. Fuck the thigh-gap and embrace that ass that wobbles when you walk.

Today, Protein World’s perception of perfection is the regular woman’s nemesis. Tomorrow, it will be some other huge organisation, armed with supermodel endorsement and endless airbrushing telling you to lose an inch here and gain an inch there. It’s about time we learned to own our own image, and project our own body confidence.

Put on your bikini and head to the beach. Beach body ready. Fin.