IT’S HARD to say whether the original yogis - who, in the pursuit of spiritual enlightenment, developed yoga rituals in northern India 5000 years ago - would approve of ‘twerking yoga’, ‘karaoke yoga’ or ‘ganja yoga’. While the centuries of ancient tradition and practice is still very much upheld, it seems that when yoga became westernised, it also got weird.

Some don’t even need yoga mats, others require paddleboards...

Yet yoga already feels pretty niche in its most authentic form, the likes hatha to ashtanga to bikram (all of which will sound like new-age gobbledygook to a lot of us) have a proven purpose in the pursuit of spiritual and physical wellness.

But can the same be said for naked yoga, or stiletto yoga or doga (that’s yoga with dogs)?

Manchester has adopted many a weird yoga class in recent years. Some don’t even need yoga mats, others require paddleboards.

Here’s a list of ten you must try in Manchester*

*A few omissions here: Manchester is not yet open-minded enough for naked yoga and orgasmic yoga, all of which take place in London. We’ll keep you updated, though:

As if yoga wasn’t challenging our flexibility range already, aerial yoga would like us to dangle upside down from red hammocks hanging from the ceiling. Body Confidential reviewed aerial or ‘antigravity’ yoga more than four years ago now. Writer Stacey Berry likened the anti-gravity room filled with bright red hammocks to a ‘bizarre, yet stylish, torture den’ and beamed at the thought of ‘learning how to fly’.

Today, aerial yoga classes at the Northern Quarter BarreCorre are still a little bizarre but also a fun and effective fitness exercise. While you learn to dangle from silk hammocks, the class still utilizes aspects of traditional yoga, pilates, calisthenics, dance and gymnastics. Aerial yoga is said to ‘increase one’s overall health and physical agility while having fun and creating beauty’. It also improves flexibility, balance and blood flow, while the practice decompresses your spine and joints, making you more mobile. It also looks like a load of nutty fun.

We too believe physical activity should be rewarded with alcoholic beverages, gin in particular. The Wonder Inn (a creative wellness centre becoming known for its unique yoga classes), launched #YINB4GIN last month, a vinyasa style yoga class followed by gin cocktails. We had hoped the gin would flow while we completed the ‘yin’, but I wouldn’t like to fill out that risk assessment.

Where to train in Manchester? Gorilla, 54-56 Whitworth Street, M1 5WW

It’s 6am. You’ve only just arrived at a nightclub. You’re stone-cold sober. You’re covered in glitter. They’re playing dance classics. The Morning Rave, Gloryville, is possibly the most surreal party experiences you’ll have in Manchester. As the rave gets going, you'll find some lycra-clad morning ravers practising yoga under disco lights as the music booms on. You can’t really hear what your yoga instructor is saying, nor is there any real routine; some end up just practising balancing on their heads, because why not? Morning raves take place once a month at club venue Gorilla. Read our Morning Gloryville review here. 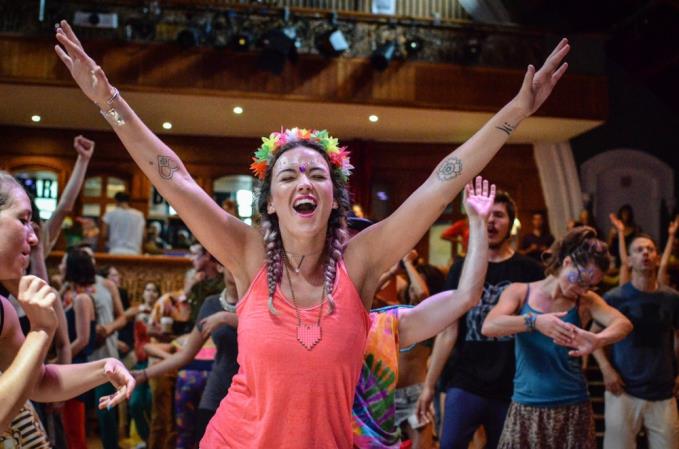 Yoga with your face? This class is positively odd. Trust us, we’ve tried it (read here). We were reassured that the purpose of this unusual class was the pursuit of eternal youth or, at the very least, less of a turkey neck in the latter stages of life. The class involves contorting your face as if you have a severe facial tick with poses called ‘owl’ or the ‘botox’ etc. With a lot of practice, these face exercises should strengthen the muscles in your face provoking taut skin without lines. As face yogi Susan Baxter explained: “Face yoga is a mixture of face exercises, acupressure and relaxation techniques.” Expect a lot of awkward staring and some jaw ache. 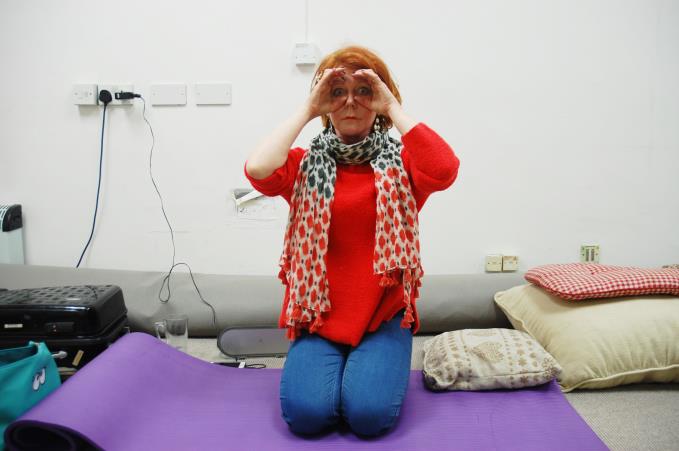 As a kid, I would balance my younger brother on the soles of my feet and lift him up in the air as if he was flying. Acro yoga is a bit like that, although, instead they’d have me balance my now 21-year-old brother, who’s pushing six foot, in the same position – I could see it going very wrong. There’s a lot of strength and trust required for this kind of yoga. There’s a strong acrobatic element to classes and you’re required to work with another person – so leave your trust issues at the door. Lululemon Manchester, on St Ann's Square, invited Eugene and Pip from AcroYogaDance, both with a martial Arts and dance background, to demonstrate their acro yoga skills. Let's just say it looks hard. Apparently, it's a good relationship builder too. 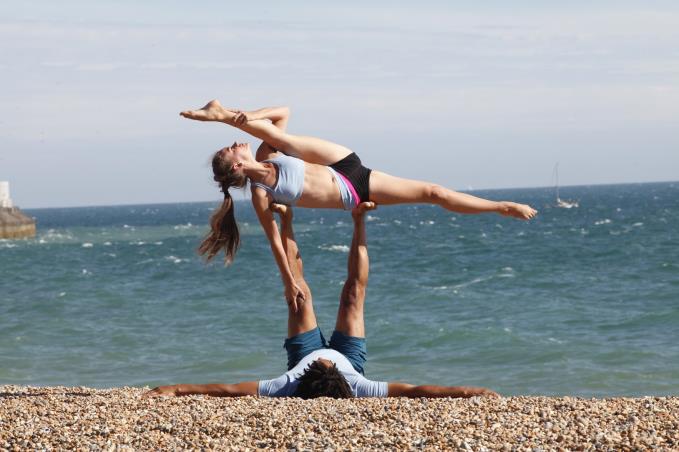 Where to train in Manchester? Find classes in both Manchester and Chorlton here

This one is a little off kilter (even more than the others) and another we’ve had the pleasure of trying first hand - read here. Once described as the ‘kindergarten for grown-ups’ this yoga involves no taxing postures; instead, you run around fake laughing, very loudly, in hope that you trick your brain into believing the fake laughter is real. It’s very surreal, in a One Flew Over The Cuckoo’s Nest sort of way.

Yet laughter yoga has 1,602 members in Manchester and reportedly 16,000 devotees worldwide. The practice was created by ‘laughter guru’ Dr Madan Kataria in 1995; he’s quite prolific in yoga circles we hear. The benefits? It can reduce stress-hormone cortisol levels and blood pressure while also boosting happy hormone. Laughter yoga is also cited as having overall positive psychological benefits to those with social anxiety and in troubled personal situations. It's still very weird, though.

Laughter Yoga has thousands of devotees around the world

Here’s where you’ll need a paddleboard. We have to admit we're yet to try this one, but it's certainly one of the more intriguing yoga classes around. As if standard yoga wasn't tricky enough, SUP yoga (stand up paddleboarding) is a 'yoga-fitness fusion' involving practicing a yoga routine on a paddleboard while floating on water. Courses are available at Helly Hansen Watersports Centre, and are said to create a 'more engaged core, improve technique, aid stress relief, increase strength and flexibility', while also improving balance and cardiovascular conditioning.

We’re sick of yawn-inducing Enya CDs too. Reggae yoga ditches airy, new-age holistic music in favour of some reggae classics. This isn’t that weird, actually. Bob Marley reportedly one said, ‘I wish we were all hippies, who did yoga...' We'd be inclined to agree. Lead by Cariad Yoga at The Wonder Inn (where else?), the classes are said to be a celebration of music and movement. You’ll complete a vinyasa flow class, one of the more fast-paced yoga classes, while having your spirits lifted to roots reggae. 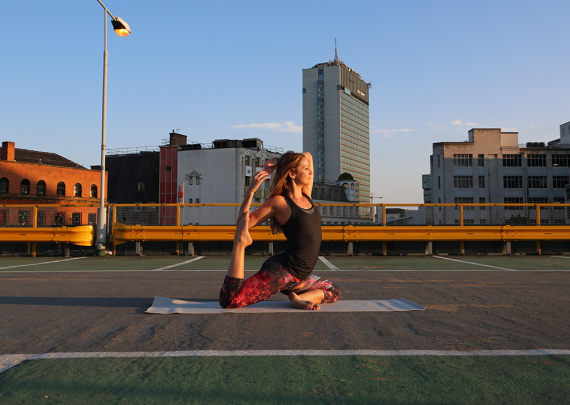 It’s just like regular yoga but there’s cats, apparently. Manchester’s new Cat Café on High Street, home to eleven resident moggies, is to offer traditional yoga classes while the furry friends roam. It’s hard to see what benefit there is to doing the downward-dog in front of a cat, but the novelty isn’t wasted on us. The classes are yet to start but we’re all for it if there’s added cuddle time post-class. 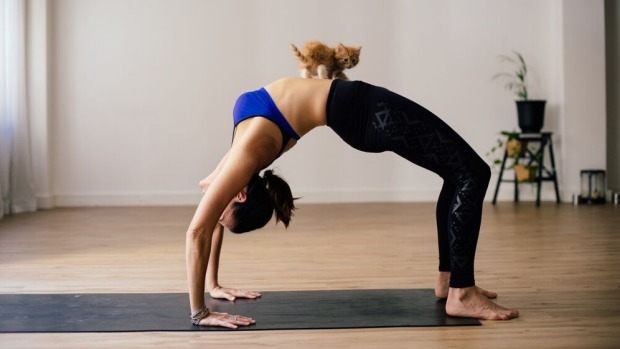 If you Google ‘rocket yoga’, you’ll find very nimble yoga instructors demonstrating what looks like breakdancing moves but with a little more grace. Yet rocket yoga was in fact designed to make traditional and very difficult ashtanga yoga faster and more accessible – although we’re not so sure it does as there’s still a lot of handstands involved. Created in the 1980s by Larry Schultz, the so-called ‘bad man of ashtanga’, rocket yoga skips all the rigid poses and goes straight to the best bits. Let's see if we can tackle this pose below...