Beer was made for Bank Holidays. And for getting Mesopotamians rat-arsed. In tribute to the Mesopotamians, Dulcimer bar on Wilbraham Road, Chorlton, are staging a five day ‘beer project’ featuring over 40 cask beers, ciders and perries (cheating that) spread over two floors. They’ll also be celebrating the seeder plow and the division of time in to 60 parts. Cheers Mesopotamia. 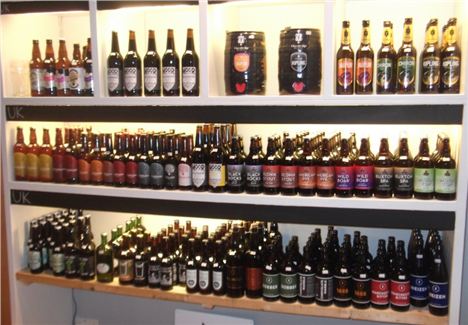 SDC, aka Jack Hamill, claims to be from the 24th century, which would explain the retro sci-fi synths and galactic funk. Belfastian Hamill blends electronica, techno and funk to create his own concotion of 'cosmic dancefloor odyssey'. No us neither... but sounds impressive doesn't it. 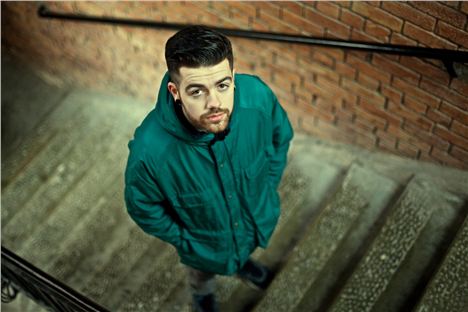 As we currently watch the band of workmen scurry around the world’s biggest wicker picnic hamper on the green, green grass of Spinningfields Lawns, it’s seems unlikely that Confidential will be able to pop down for a shandy or two post-Frursday (that's a Thursday masquerading as a Friday) - yep, we've just had word, Friday it is. Open in time for ducky, ducky, quack time (below).

The Lawn Club (formerly Hibernate, formerly InBloom), which is now at least twice as long as Long Bar opposite (which should probably change its name) will be ‘focussing on a quintessentially British theme, mixing traditional charm with modern glamour and contemporary design’ with a retractable roof, day beds, open fires and added seating. 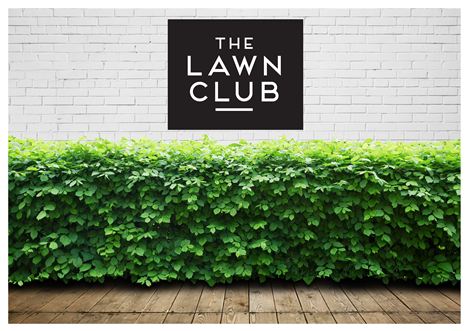 Confidential was sad this week to learn that during the build-up to Spinningfields fifth annual charity duck race, the pressure had got to Dave the Giant 20ft Inflatable Duck and he’d launched himself from the roof of Quay House following a 48 hour rock’n’roll bender (image below).

Still, somebody blew him back up and packed him off to rehab to be ready in time for the big day. There’ll be a bouncy castle, candy floss, a craft tent, ice cream, a giant slide and hook-a-duck for the kiddies from 11am. The race proper will start at 2pm by the Irwell in Leftbank (around the newly opened Mark Addy pub). Post-race Screenfields on Spinningfields Lawns will also be screening the Mighty Ducks. 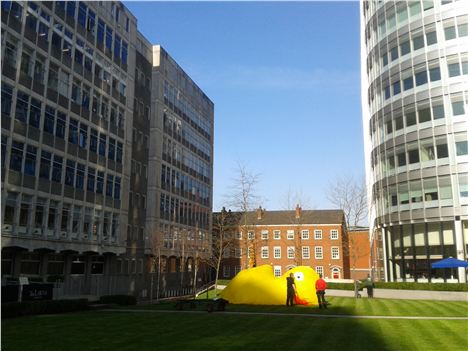 Manchester’s ‘one-man blues explosion’ rips into the harmonica and sings original Chicago Blues fuelled by the likes of Howlin’ Wolf, Little Walter and Sonny Boy Williamson. Franny has got the blues so bad that rumour has it his dangler resembles a Smurf's arm. The first round of the 2014 BMX Supercross World Cup takes place at the National Cycling Centre this weekend. Britain’s Liam Phillips is the current UCI World Champion, and after a fantastic 2013 which saw him take the world title in New Zealand in August, Manchester-based Philips will be hoping to outride double Olympic champion Maris Stromberg of Latvia after crashing out of London 2012.

Art: Read All About It: Secrets Behind The News, Artzu Gallery, Spinningfields, Until Tuesday 22 April

The Times Newseum is an exhibition of artefacts, documents and installations from ‘the UK’s paper of record’ that show how the news has been delivered through the centuries from Manchester’s Peterloo Massacre of 1819 up to the current digital age. With one installation dangling 80 smartphones with live Times twitter streams from the ceiling, the exhibition is also currently Manchester’s most nickable. 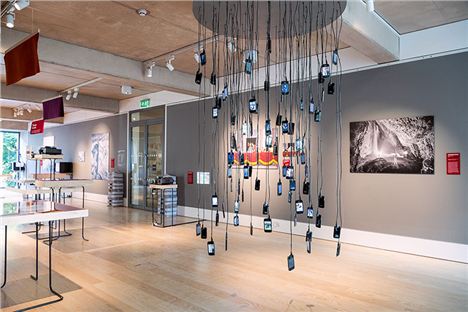 To accompany the current Power: From Muscle to Machine exhibition at the museum, the MOSI shall welcome John 'annoyed neck' Evans: strong man, ‘head balancer extraordinaire’ (straight from the UCAS career search quiz) and that bloke from Britain’s Got Talent 2011 that went on stage and said: “I’m John, I’m 64, I’m a diabetic and I’ve only got one eye.” Now that’s show business. The Museum hopes Evans will bring the theme of power to life by attempting the world record for balancing Gorilla Tubs on his head (Saturday 1pm). What’s a Gorilla Tub… who knows? Go find out. 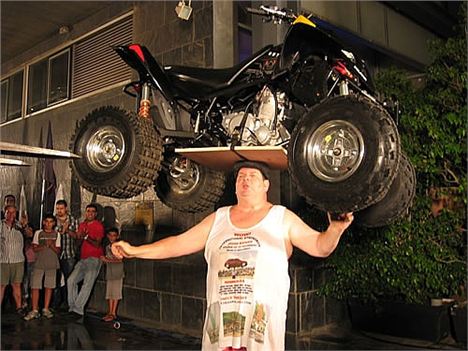 Once again Manchester dusts off the vinyl to chuck itself back into this global event. Started in Baltimore in 2007, Record Store Day is 'a day for the people who make up the world of the record store - the staff, the customers and the artists - to come together and celebrate the unique culture of a record store and the special role these independently owned stores play in their communities.'

Getting stuck in are Northern Quarter’s Eastern Bloc Records, Piccadilly Records and Beatin’ Rhythm Records with each store stocking a selection of the 608 exclusively limited Record Store Day releases. Deaf Institute, Soup Kitchen, Common and Ruby Lounge are thrusting their oar into the night too. 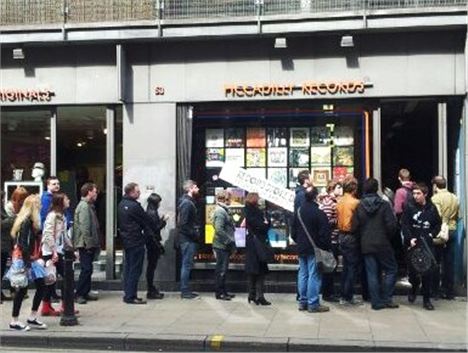 Controversial arthouse director Lars von Trier continues this sexual epic which finds Joe, the protagonist, recounting the rest of her promiscuous life to the solitary bachelor Seligman, the man that pulled her beaten from a London alley. If you're not fond of bonking, I wouldn't bother. 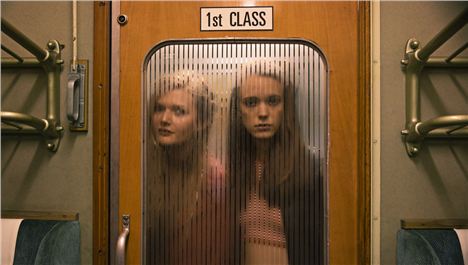 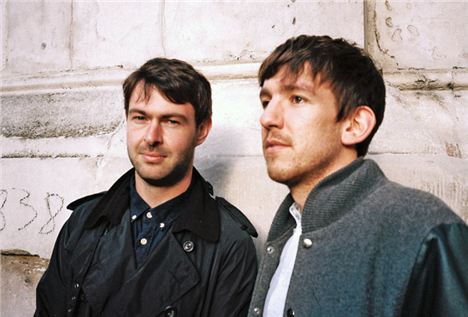 One of the Northern Quarter’s original new breed, the bar opened its doors on 23 December 2004. It then closed for Christmas, a perfect time for a bar to shut up shop, opening again for the cold, dark, quiet month of January. Still, they’ve got sticking power this lot. This year is the bar’s tenth, so to celebrate the bar will be throwing ten ape-shit birthday bashes beginning this Easter Weekend and continuing on through the year. From 4pm ‘til 1am Common will hold a Haxan special with Sean Canty from Demdike Stare and Lisbon’s Yong Yong. 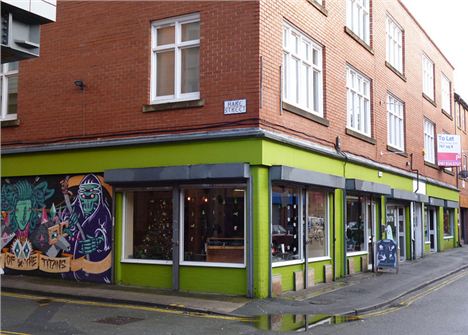 Theatre: Much Ado About Nothing, Royal Exchange Theatre, Until 3 May

Maria Aberg directs the Royal Shakespeare Company in this production of arguably Shakespeare's best comedy. Much Ado is a play of parallel love stories and a fair bit of flapping about.

Claudio and Hero meet and, as was the tradition in the sixteenth century, fall instantly in love - they were simpler times. Beatrice and Benedick, who spend most of the play tearing each other new ones, also fall in love. It's one big love-in. However, the meddling Don John sticks his nose in and things take a turn for the tits-up.

A retrospective work by internationally renowned Manchester-born, Manchester-taught illustrator and DJ Stanley Chow. Exploring Chow’s childhood memories, the exhibition brings together twenty years worth of work. Turning the window space into a Chinese takeaway shop front, these ‘takeaway memories’ will be available for the price of your average vermicelli at the end of the exhibition. 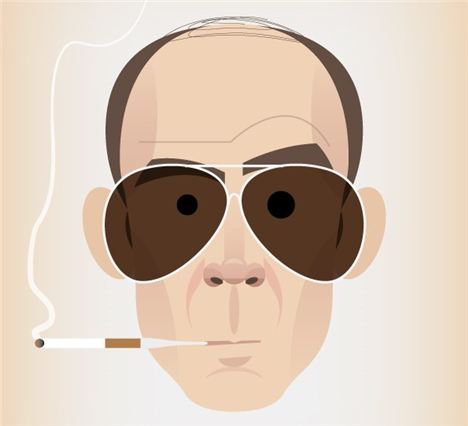 The good first lady and trailblazer of Spinningfields bars has been locking willing drunkards in its bars over the Easter Bank holiday since it couldn’t turf people out the first time around. So they cashed in and made it a thing. Although cocktail is fast becoming the most annoying word in the world, alongside swanky, selfie and fracking, give us 2-for-1 and that vexation can be swilled right down and into the night. New boys on the block and Manchester’s own budding Maroon 5 (four actually), Rixton, are a fresh-faced poppy rocky R&B thing racking up the hits on Youtube and even playing their own instruments. Which in today’s world of pop practically makes you Bach. Expect them to score a few hits, get thrown into the gutter and go back to finish their AS-levels. Enjoy them while you can. Or don’t. Probably that last one.

Tickets are FREE but limited here.

Victoria Baths is hosting a ten-day celebration exploring the power of physical movement, including the phenomenon of Northern Soul, with an engaging line-up of video installations, film, music, dance and live art performances based on the premise that ‘how you move is who you are’. In which case, my mate Slow Joe is a boulder. 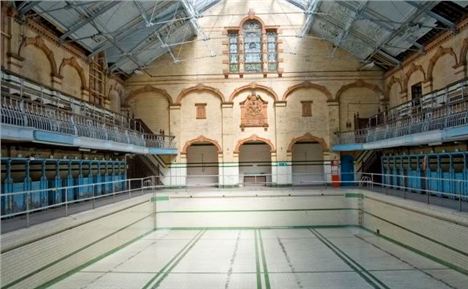