The biggest Manchester redevelopment plan of all time 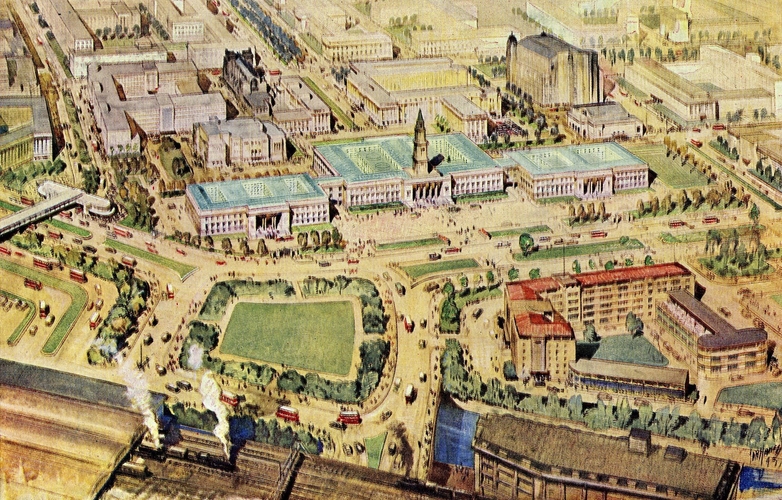 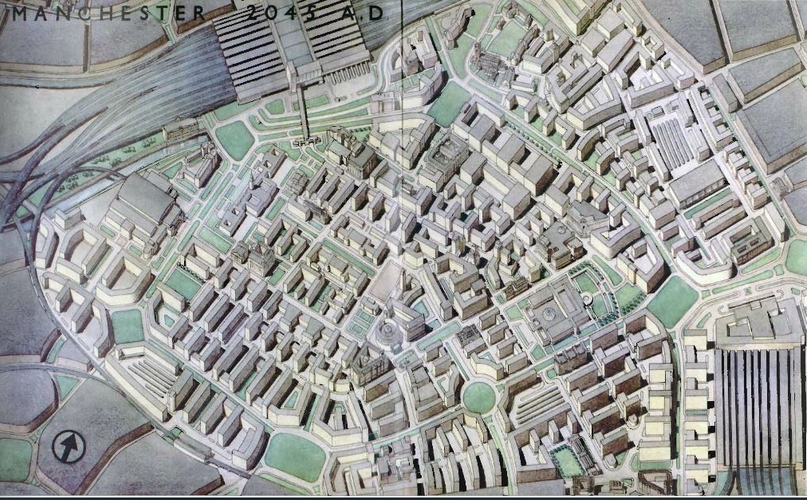 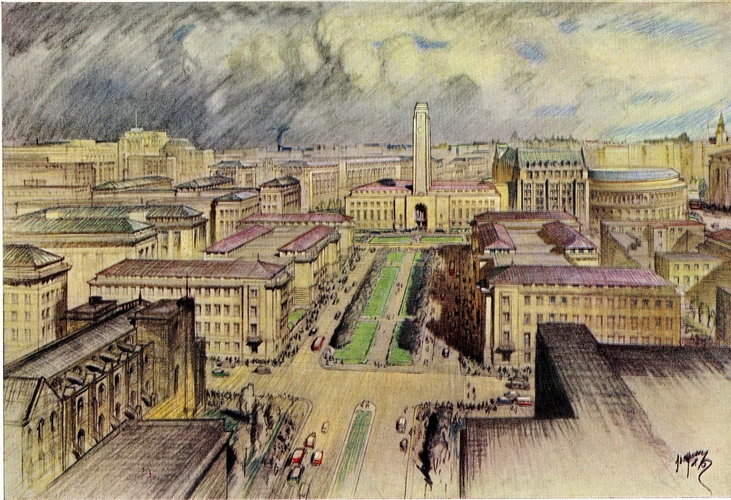 Jonathan Schofield on the 1945 Manchester Plan and modern echoes

Next week footballer-turned-property developer Gary Neville will reveal the latest plans for his St Michael’s scheme between Deansgate and Southmill Street. In summer 2017 the city centre is ringed with huge development schemes delivering several buildings over 40 storeys high. The central core is being extensively worked and reworked.

It’s hard to detect a thought through plan behind the rush to develop. It appears every scheme is judged purely on its own merits with scant regard as to how it might impact on the city scene. Of course reports have to be drawn up before planning permission can be granted but to the interested general citizen these appear toothless, and if they require changes to schemes, the changes appear minor.

Manchester’s body politic once took a very different view. The City of Manchester Plan 1945 was perhaps the most ambitious re-imagining of a British city ever conceived. It ran to almost 300 pages in a large, dust-jacketed, fully illustrated hardback book printed by the Manchester Corporation, the present Manchester City Council.

The principal writer was City Surveyor Rowland Nicholas and he wanted to take the end of World War II and turn it into an opportunity for Manchester to wipe the slate clean, ‘to enable every inhabitant of this city to enjoy real health of body and health of mind’. And my-oh-my how he and his team grabbed the chance with both hands, delivering what has become a fascinating monument to counterfactual imagination, a memorial to utopian aspiration.

Rowland and his crew imagined a city centre of wide tree-lined boulevards, of fresh air, of zoned areas for commerce, housing, industry, education and recreation; a city freed from the gloom of the pre-World War II Great Depression, liberated from the filth of nineteenth century industrial grime, a rational city. The idea was to make Manchester a flagship for peacetime Britain, an example to others.

Although written before the General Election of 1945 that swept Clement Atlee and the Labour Party to power, it seems to snugly fit the mood of the new administration and the nation. In the years ahead Atlee would pursue the notion of an egalitarian state defined by nationalised industries, the National Health Service, comprehensive education and an orderly retreat from Empire.

There is a whiff of self-hatred about the 1945 Manchester Plan though.

Britain was broken as a superpower and many found it hard to face the country’s past. Manchester was typical of this. The city of the world’s first modern industrial society, scarred by the energy of those years, looked in the mirror and reeled back in horror. Better to wipe all that away, get rid of the old stuff, with its attendant Imperialism. Best to make a fresh start.

To achieve the ambition of the rational modern city, most of the older buildings had to go; the mills, the warehouses, the offices and banks, the housing. Alfred Waterhouse’s Town Hall had to go as well of course (too-fussy, too-paternalistic, too aggressively Victorian), a suggested sacrifice to encourage the wholesale repositioning of the city.

John Rylands Library, the Cathedral, Sunlight House, Kendals, Central Library and a few other choice morsels could stay, but for the rest it was bye-bye. After all as the Plan said: ‘Many of our present difficulties are complicated by the fact that in the last century commercial and other buildings were designed to last too long; they have remained structurally sound long after they have been rendered obsolete by changes of function and progress in building technique’. This sounds astonishing now. Is Rowland Nicholas implying that new building techniques were superior because they didn’t result in buildings that truculently refused to fall down.

The introduction to the Plan from Rowland Nicholas delivers a warning.

‘It was the blitz which awakened public interest in planning. But it was not the blitz which made planning necessary. The city we live in is not a great improvement of the Manchester of 50 years ago. Individual buildings have changed but congestion, dirt and ugliness remain. If at every stage a process of reconstruction is made to conform to a master pattern of a kind suggested in this book, the Manchester of fifty years hence will be a city transformed; if not, it will be still as ugly, congested and dirty as it is today.’

‘We are entering upon a new age: it is for us to choose whether it will be an age of self-indulgent drift along the pre-war roads towards depopulation, economic decline, cultural apathy and social dissolution, or whether we shall make it a nobler, braver age in which the human race will be the master of its fate.’

There is a quality to this magnificent beast of a plan that seems admirable and attractive. It has a yearning optimism for a perfectable world, a post-WW2, post-Auschwitz, post-colonial, fairer world. It reflects an intellectual moment in Europe that still smells fresh, a desire to forget all the rubbish and madness that had gone before.

And therein lies its downfall.

The world isn’t perfect, it’s messy and full of compromise. More to the point there simply wasn’t the money around to achieve the Plan. This worked out well for modern Manchester. We would have lost so much. And when you look at the ideas carried forward based on the Plan, the monumental stupidities of grand schemes such as Hulme Crescents, we can only shudder. Despite the wonderful optimism of the 1945 Manchester Plan it was way too ambitious, way too uniform, way too...well, paternalistic, and thus exactly what those drafting the plan had wished to avoid.

Time after time Rowland Nicholas repeats a theme ‘it is for you, the citizens of Manchester, to make the choice.’ This rings false. The Plan was exhibited in Manchester Art Gallery and published in the book form mentioned above. Yet the evidence from the developments that did take place in subsequent decades makes it clear that working class populations were shunted about as the planners saw fit whether there had been a consultation or not. This was done for their own good, of course.

There are echoes of this high-handed approach in Manchester today where consultations over major developments and new buildings often seem a game to keep the public quiet.  Schemes are rarely altered through public consultation in Manchester. Gary Neville has had to rethink his plans for his St Michaels towers but that is a very rare result indeed.

Back to the Manchester Plan. Despite all the beautiful illustrations and stirring prose of the 1945 ideas, if carried through we would have been left with a Stalinist vision of a city, a huge extended version of Nova Huta close to Cracow.

The Plan is superb but only because it failed; the vision is thrilling, the idealism stirring, the reality, apart from one or two ideas, would have been horrific. Instead of the glorious mess of Manchester architecture we would have been left with a regimented, cold and brutal street scene. To want that would have been irrational.

Yet to have a ‘plan’ that is no plan in Manchester and Salford today scarcely seems better. True, the way developments come about fits with the historical pattern of Mancunian urban growth before and after the 'Plan'. In other words schemes appear to be treated in isolation and on very narrow terms rather than part of an overall picture. Nobody would suggest the 1945 Plan would have delivered a desirable outcome but many parts of it would have made Manchester a more humane city, certainly the emphasis time and again on the provision of more green space, of any space.

It’s curious to imagine what Rowland Nicholas would think if he took a walk across the 2017 city from, say, Whitworth Park down Oxford Road, through St Peter’s Square, round through Castlefield and Spinningfields, St Ann’s Square, Exchange Square, the Cathedral Quarter, the Northern Quarter and Ancoats.

Would he still accuse us of ‘self-indulgent drift’ or would he find areas of Manchester he would consider ‘a city transformed’?