BEST OF MCR: Our Greatest Achievements

THE list below represents a snapshot of what the Greater Manchester area has pioneered. The extraordinary fecundity of achievement was set in stone as Manchester became the world’s first modern industrial city in the nineteenth century: the potent symbol of how urban society had changed. It led the world into the modern age, on the back of an incredible number of ‘firsts’.

This pioneering spirit then continued and still continues, underlining our region’s creativity and initiative.

Manchester has 25 Nobel prize-winners more than all but seven nations.

As mentioned above the list below is only a selection of Manchester firsts - there are many more. If we've missed some please tell us which in the rant section.

Here's our favourite quote about the city:

'Manchester is the place where people do things. Don't talk about what you are going to do, do it. That is the Manchester habit. And through the manifestation of this quality, the word Manchester has become a synonym for energy and freedom and the right to think and to do without shackles.' Judge Parry, 1912.

The Anti-Corn Law League – This was the first modern political movement and began life in the 1830s. It employed full-time administrators, teams of public speakers, mail shots, lobbying and latest technology: the new telegraph. Its methods were the model for later political lobbying groups.

The Free Trade Movement/Manchester School – This grew out of the Anti-Corn Law League and resulted in Manchester being the only British city to get a philosophy named after it: The Manchester School. The leaders of the Manchester School believed that trade should be allowed to flourish without government interference - which too frequently was both nationalistic and aggressive. Twisted by Margaret Thatcher and Ronald Reagan into neo-liberalism in the 1980s, it underpins the globalised nature of trade in 2010.

First Female Bishop - On 26 January 2015 Church history was made in the UK when the Church of England ordained its first women bishop, Libby Lane, the former vicar of St Peter's Hale and St Elizabeth's Ashley, in Greater Manchester. She becomes Bishop of Stockport, Greater Manchester, and she is a Manchester United supported and married to a fellow C of E priest.

Vegetarianism – The movement began in 1809 in Salford Bible Christian Church, inspired by the sermons of the local preacher named, of all things, the Rev. William Cowherd. A vegetarian cookbook was published here by Martha Brotherton from 1812 and her husband, Joseph, was the first fully vegetarian MP.

Votes for women – Emmeline Pankhurst founded the Women’s Social and Political Union in 1903. This body eventually went millitant and was nick-named the Suffragettes. Earlier in 1867, the National Society for Women Suffrage was founded in Manchester by Lydia Becker.

TUC – The first general meeting of the Trades Union Congress was held in 1868 in the Mechanic’s Institute, Princess Street.

Shakers – Ann Lee, founder of the Shaker religion, was born in Manchester in 1736. She emigrated to America in 1786, taking her visions with her. The strict religious sect is now cheifly known for their furniture design.

Atomic theory, meteorology, colour blindness – John Dalton is a scientific colossus of Manchester. His atomic theory (1803), with its pioneering work on the constitution of elements, was the precursor of all modern chemistry, whilst his lectures on meteorology turned the study of weather into a science. He was the first to describe colour blindness.

First Law of Thermodynamics – Law of physics concerning the mechanical equivalence of heat discovered by James Prescott Joule (1819-89): commemorated by the unit of energy the “joule”.

Cast iron beam – The introduction of cast iron beams strong enough to span large distances was the work of Eaton Hodgkinson and Sir William Fairbairn for bridge building, in particular the Britannia Tubular Bridge across the Menai Straits. They also began the large-scale use of plated wrought iron. Fairbairn (1789-1874), an engineering giant, was responsible for advances in boiler making and invention of the riveting machine.

Steam hammer – Invented in 1840 by James Nasmyth at his Patricroft factory.

Earth density – Monton born John Henry Poynting established the mean density of the earth in 1891. The Poynting Robertson Effect helps explain the effect of radiation from the sun.

Splitting the atom, the atomic nucleus - Ernest Rutherford, working at Manchester University, discovered the nucleus of atoms and later how to split the things in 1919. His assistant was Hans Geiger of the Geiger Counter fame.

Computers – The first computer with a stored programme and memory, nicknamed 'The Baby', was developed at Manchester University in 1948 by Professors Tom Kilburn and Fred Williams.

Obstetrics – Doctor Charles White pioneered new practices in obstetrics, including the use of fresh water and fresh air for women after giving birth.

Graphene - The Nobel Prize in Physics for 2010 was awarded to Andre Geim and Konstantin Novoselov at the University of Manchester ‘for groundbreaking experiments regarding the two-dimensional material graphene’.

Modern canal – In Britain, this was the Bridgewater Canal in 1761: a totally artificial waterway independent of natural rivers.

Railway – The world’s first true railway began operating from a purpose-built station on Liverpool Road in 1830. Stockton and Darlington had the first line but it was the success of the Liverpool and Manchester Railway that launched the railway revolution.

Submarine – The first mechanically powered submarine was launched in 1880 to the designs of Hulme curate, the Rev. George Garrett. He also invented an armour-plated mortarboard for academics under attack.

Swing aqueduct – The first and only swing aqueduct in the world is at Barton, west of the city. Built in 1893, it carries the Bridewater Canal over the Ship Canal together with 800 tons of water.

British plane and aviator – Local man, AV Roe, designed and flew the first totally British aeroplane in 1908. Roe pioneered the enclosed cockpit and single joystick. In 1928, one of his Avro Avians, made in Manchester, became the first plane to complete a solo flight to Australia.

Trams – Trams were reintroduced on to UK streets in 1992 with the Metrolink service.

Professional, permanent orchestra – This was the Halle Orchestra, set up in 1858 by German Charles Halle who was later knighted for his work.

Art Treasures Exhibition – Following the success of London’s Great Exhibition with science and industry, Manchester, in 1857, began a trend for international art exhibitions - with 16,000 works this remains the largest temporary art exhibition in history.

Top of the Pops – The now defunct TV show was first broadcast from Rusholme in 1964, headlined by The Rolling Stones and The Hollies.

Manchester International Festival – Manchester's main arts festival takes place every two years (it began in 2007) and was the first to only programme completely new and original works.

The Football League – The world’s first professional football league was set up in 1888 in the Royal Hotel, Piccadilly.

Crowds – The only time that the crowd at a English club match has exceed 84,000 was at Maine Road in 1934, when Manchester City played Stoke City in the FA Cup 6th round. The actual attendance was 84,569 and City won.

Water – Manchester led the way in providing the citizens of the new big cities with a supply of pure, fresh water when it opened its Longdendale Reservoirs in 1851.

Municipal libraries – Salford Borough Library opened in 1850, followed in 1852 by Manchester’s which operated the first Children’s Library from 1862.

Bullfighter – Frank Evans from Salford was Britain’s first matador and has fought many times in Spain.

Rolls-Royce – In 1904, Frederick Royce met Charles Rolls at the Midland Hotel where they set up the famous company.

UFO landing pad – In the new Hulme Park, there is a UFO airport located on ley lines. Honest. Manchester likes to think ahead.

Rolls met Royce at The Midland 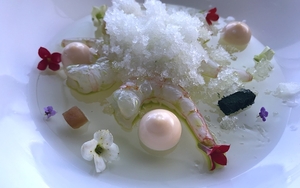 Eels, ice cream and ox two ways, we round up our favourite eats of the...