Magical Mykonos still super chic after all these years 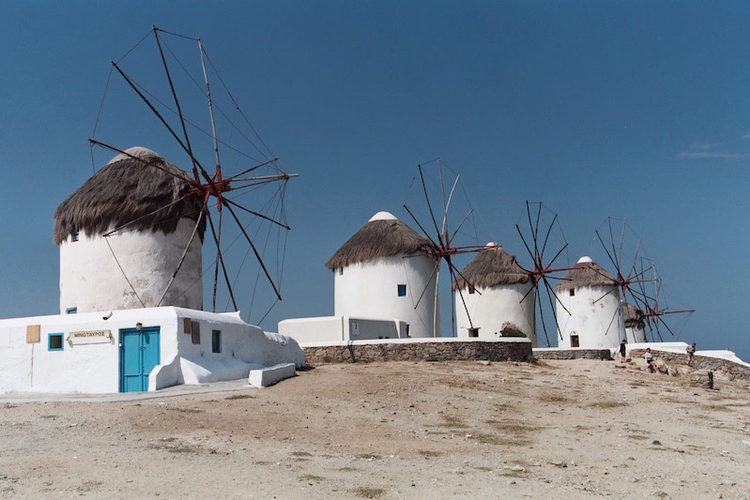 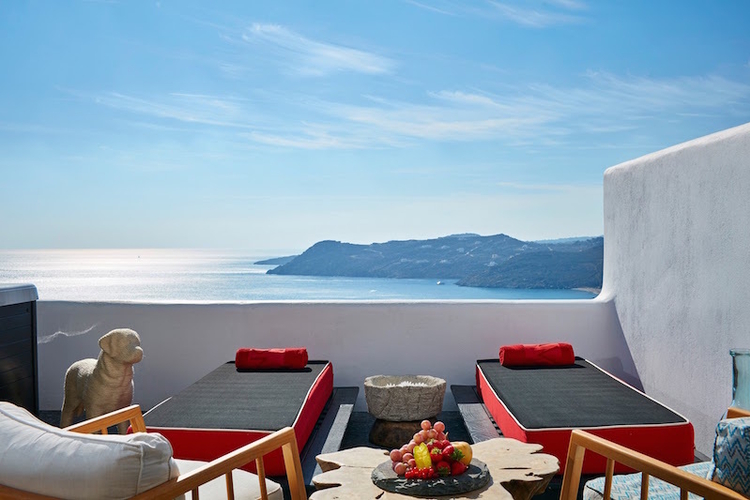 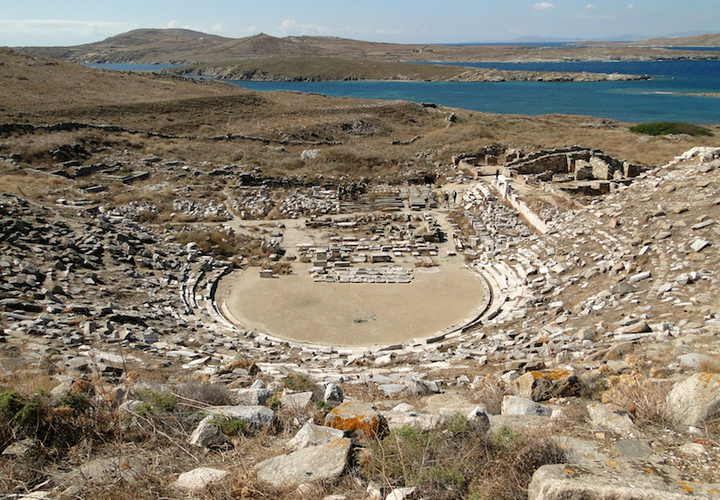 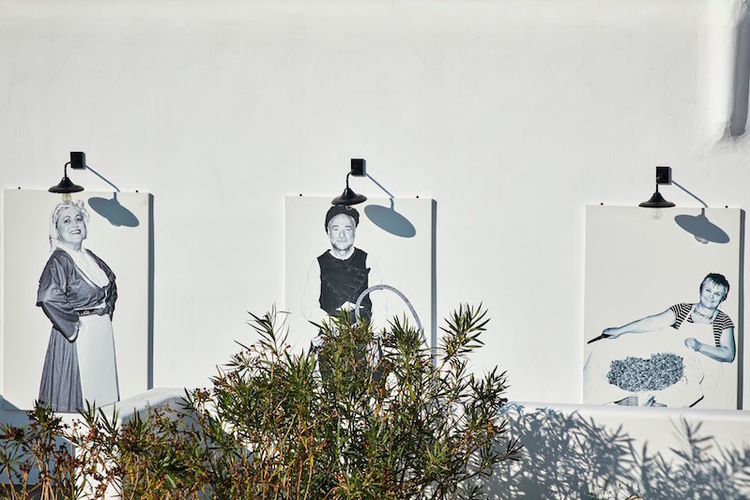 ANCIENT Greeks had a name for their most cherished places: Avaton. They waxed even more lyrical, describing these gems as “so perfect, sanctified and immaculate that no common foot may be set upon them.”

Setting my two common feet upon the threshold of our Myconian Avaton resort on the Aegean island of Mykonos I expected the best. I wasn't disappointed.

Wallowing in my personal Jacuzzi on bedroom balcony, buffeted by bubbles, bathed in lights of ruby, amber, sapphire, amethyst and emerald as the sun sunk behind the horizon of Elia Beach.

Bemused, perhaps, as I entered a menagerie of model animals from penguins and rhinoceros to guard dogs and monkeys balanced on gilt pineapples. I felt I'd wandered into a zoo morphed into a modern art gallery, or sampled one too many cocktails mixed by bar-top ceramic  monkeys.

Bemused but not disappointed.

How could I be? It was early October, still wonderfully warm, the sea welcoming after a scorching summer enjoyed by an island known for its heady hedonism and made famous since the Sixties by celebrities such as Christian Dior, Jackie Onassis, Grace Kelly, Liz Taylor and Princess Soraya.

After the Swinging Sixties the boho chic of the Seventies elevated Mykonos from a bartering economy to top tourist destination with a well-founded reputation for wild yet glamorous parties and cosmopolitan laid-back luxury. We hit the dance floor only once in our long weekend break but certainly immersed ourselves in the luxury.

Treat One was wallowing in my personal Jacuzzi on bedroom balcony, buffeted by bubbles, bathed in lights of ruby, amber, sapphire, amethyst and emerald as the sun sunk behind the horizon of Elia Beach.

Treat Two was a visit to the Avaton Spa, where a plethora of pools offer fragrant waters scented with essential  oils of lavender and aloe vera alongside energising hydro massage with therapeutic salts. 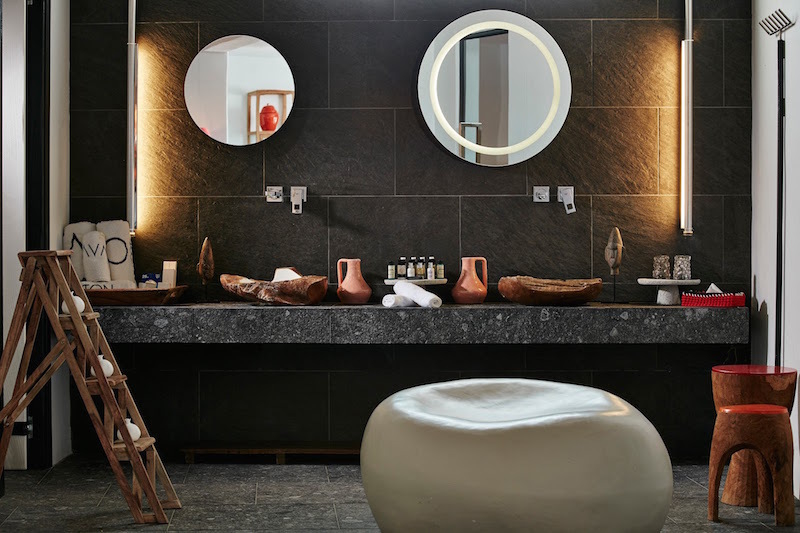 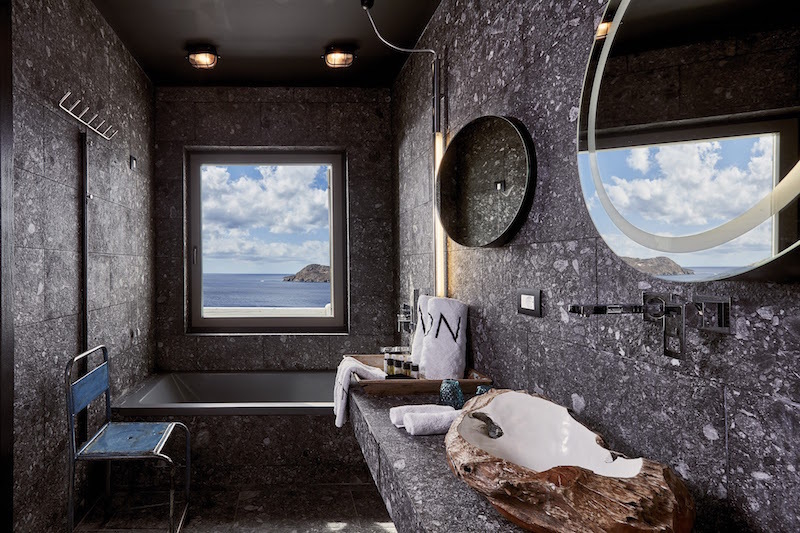 In this sanctuary of the senses I met the heavenly Ourania. Heavenly by name – she was the goddess of astronomy and astrology and one of the nine Muses – and heavenly by nature of her touch.

From a choice of massage oils I turned down coconut and vanilla  (too much like being smothered in pina colada and ice cream) for avocado and lily for 50 minutes of harmonising bliss.

Good news: I floated out of Ourania's candle-lit haven on a fragrant cloud with my spine feeling inches longer. Bad news: her advice that my knotted neck and shoulder muscles will need twice a week kneading to loosen.

And Treat Three was the fabulous food. “You'll gain two kilos during your stay,” pledged Avaton's smiling manager as he greeted us Thursday lunchtime. Post-breakfast Sunday proved him right.

Not one Greek salad of olives and feta cheese passed our lips as we sampled exotic menus.  Avaton's buffet breakfast tables groaned under everything from Bucks Fizz with smoked salmon and scrambled eggs to granola, cheeses, waffles,  chocolate croissant and cakes dripping honey.

Lavish lunches with every fish and sea food you could wish in soups, pasta, risotto or swimming in their own ink or rich sauces, from squid, shrimp and sea bass to king crab and cod. Carnivores and vegetarians were equally well served: calf fillet, rib eye steaks, baked pork and lamb chops; egg plant tart, baked fennel, ravioli and truffle cream.

With such stress on the achingly trendy style of these hotels the slightest flaw sticks out like a sore thumb. My only moan – apart from the fact that disabled access was low on their priority – was untidy rubble beneath my balcony and the sight of the ugly air con of my neighbour's accommodation.

But lounging in swinging chairs suspended from the ceilings or on crazy  cushions decorated with crimson lips and Dali-style moustaches, with rugs woven in a rainbow of colours and textiles, tapestries and decorative ropes restored holiday vibe. 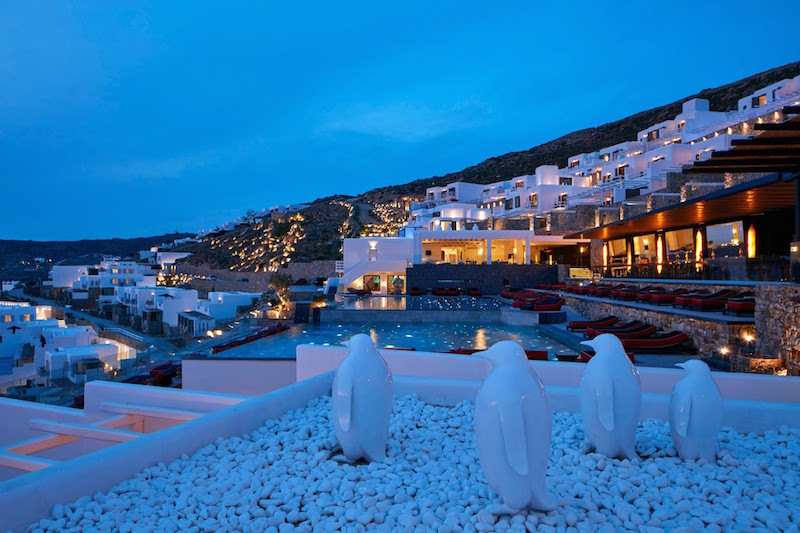 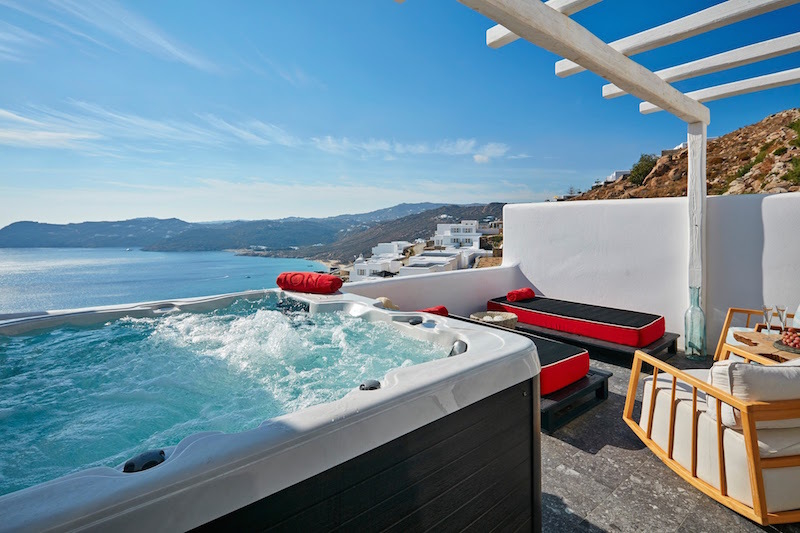 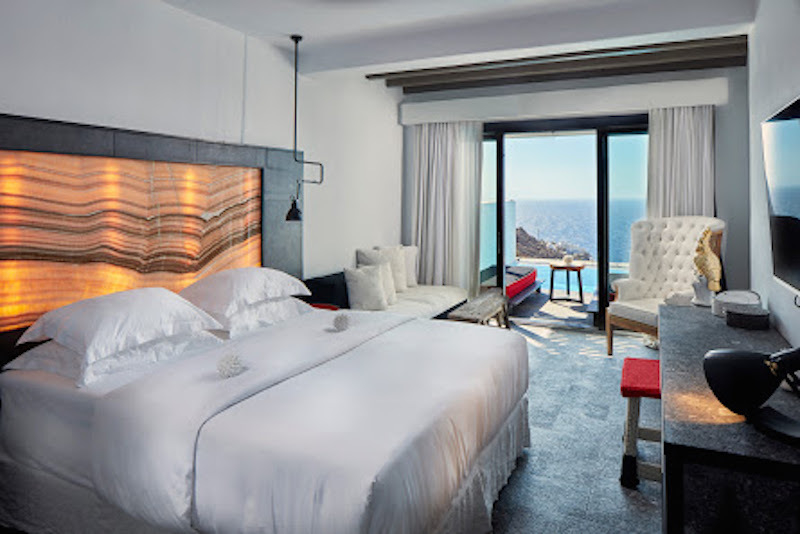 Mykonos owes its early popularity as a tourist destination to its proximity to Delos, a must-see archaeological site inhabited in the third millennium BC, prospering for seven centuries.  It is the mythical birthplace of  the twins Apollo and Artemis, a place of ancient pilgrimage and now a UNESCO World Heritage Site.

Just a 30 minute boat ride transported us back in time to a thriving city of grand houses, temples intricate mosaics, libraries and shrines rubbing shoulders with communal lavatories, brothels and bars.

A terrace of gleaming white lions and magnificent marble pillars pierced the bluest of skies as thousands of selfie-toting tourists wandered this vast site of religion and commerce that once attracted merchants and bankers from Egypt and Syria. The Romans turned it into a duty-free port, making their fortunes from selling up to 10,000 slaves a day.

From a population of 30,000 the island is now uninhabited except for languid cats and 24/7 guards armed with whistles to warn off visitors from clambering over ancient walls and statuary.

Perched on a narrow, barren island 5km long and1,300m wide there's little shade on the site of these sprawling, dusty ruins. A visit in the searing heat of the summer would be daunting while spring and  late summer are ideal – so long as you bring water, sensible shoes, sunscreen and hat.  We took a break from the sun by visiting the museum, which houses mosaics and original marble lions – the ones on the terrace are plaster cast cheats.

As well as the magnet of Delos today's visitors flock to the windmill island of Mykonos – there are still a handful left standing – to enjoy a relaxed cafe society with ancient bakeries, bars, boutiques and art galleries crammed into a labyrinth of narrow cobbled streets, home to 600 blue domed churches.

Avaton and its eight sister hotels of the family-run Myconian Collection, have an intriguing history that began when a young man with a new bride from Delos completed his military service and returned home as a humble bus driver.

Ambitious George Daktylides persuaded his brothers to buy more buses to run the first public transport system on Mykonos.  Not content with a fleet of 25 on which his four sons sold tickets George seized the opportunity of expanding the fledgling tourist industry, building the island's first private out of town hotel, the Kohili.

“Dad worked from morning to night and  invested all the  profits back  into the business, and my mother had one good  pair of Sunday shoes she would only wear before walking to church,' said son Vangelis, now CEO.

She would make breakfast for hotel guests, do housekeeping and laundry, provide meals for scores of construction workers and take her sons for daily swims. “My parents would sacrifice anything to create opportunities for us.”

He and his three brothers were sent to a top hotel school in Lausanne to master the business. “There was never a question in our minds whether this is what we wanted to do.”

They returned home to see the empire grow to nine, including 5 star hotels. The brothers have nine children and doting Granddad – still CEO of the Myconian Collection despite reaching retirement age – brings them farm eggs, home-reared lamb and goat with cheese and cake made by grandmother Eleftheria.

Hospitality, it seems, is in the DNA of the Daktylides dynasty.

Myconian Collection offers rooms at the Myconian Avaton Resort, Elia Beach a member of Design Hotels from €255/£225 per room per night. Direct flights from Manchester to Mykonos available with easyJet. The harmonising massage treatment at Avaton is €100 for 55 minutes and day trip to Delos is available from €20 for a round trip ferry boat journey from the port of Mykonos, Entrance to the museum of Delos is €12 per person.