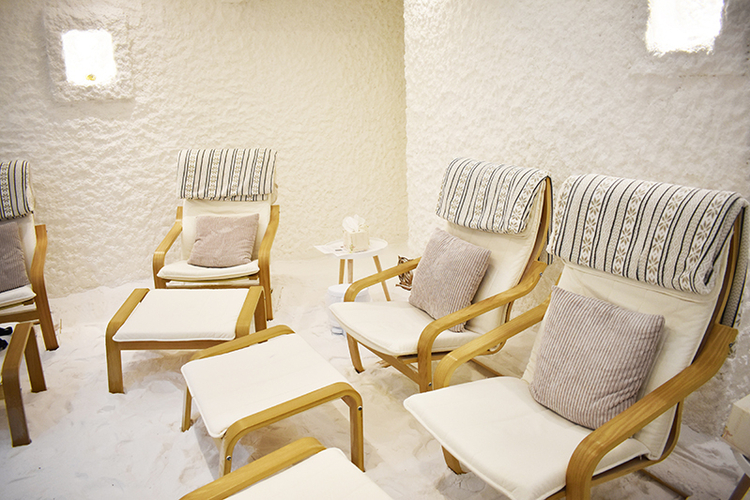 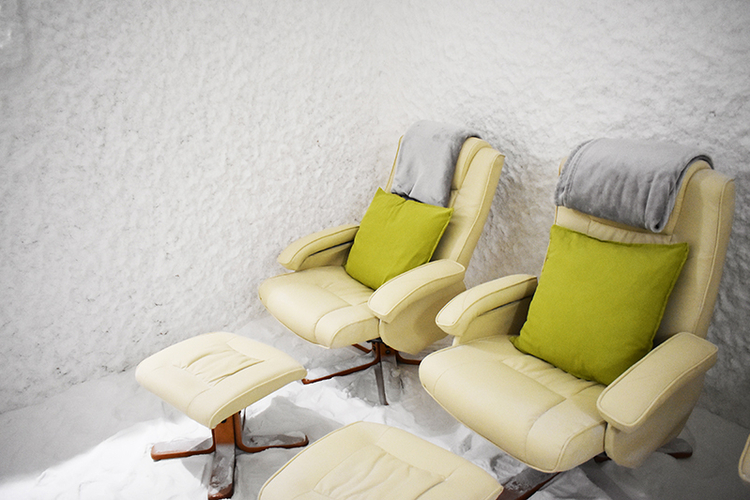 I’m reclining on a wooden chair, surrounded by pure white sand. Sounds of sloshing waves lapping at far-off shores lull my senses. And there’s a familiar taste of salt in the air. I could be at the beach, but I’m not – I’m slap bang in the heart of Liverpool, just a ten-minute walk from Lime Street.

I’m at Liverpool’s Salt Cave, a therapy centre that hails the benefits of salt-enriched air. Though the cynic in me had originally written it off as another of those health fads, it turns out that there are more benefits to be enjoyed from sodium chloride than a superstitious swish of salt over your shoulder.

“Salt is both anti-bacterial, anti-inflammatory and has mucolytic effects, meaning it can break down mucus build up in the body,” explains Zoltan, the owner of the North West’s only Salt Cave clinic. “This makes it a natural treatment for respiratory conditions, skin conditions and even boosts the immune system.”

I had expected Zoltan to be a holistic guru, eager to preach a vision where salt saves the world. But Zoltan, who first discovered salt therapy whilst searching for a relief for his wife’s severe hay fever, is refreshingly down to earth.

When inhaled, the dry, salt-treated air can ease symptoms of respiratory ailments including asthma

“People come to us because they are tired of having to take so many drugs and then having to deal with all the side effects of taking so many drugs. Of course, we don’t recommend stopping treatments proscribed by your doctor. But salt therapy is a natural, non-invasive treatment that can support your medical plan. If patients are unsure, we always recommend they check with their GP first.”

Patients seek out the clinic in pursuit of natural, non-invasive treatments to long term conditions. When inhaled, the dry, salt-treated air can ease symptoms of respiratory ailments including asthma, hay fever, bronchitis, sinusitis and even cystic fibrosis. The salt-rich air can also work wonders on the skin, offering a natural alternative to the topical steroids often proscribed for eczema and psoriasis. The sessions are open to both children and adults, with a dedicated children’s room.

A £35 session last 60 minutes, during which visitors relax in recreated salt caves. White salt blankets the floor and walls, and, though this is just for an aesthetic effect, the result is a serene blank canvas that filters out the buzz of the city outside. Highly purified pharmaceutical grade salt is pumped through the air, enabling visitors to inhale it deep into the lungs. Symptoms can be expected to subside Zoltan explains, sometimes for up to twelve months.

“I definitely notice a difference when I haven’t been to the clinic in a while,” explains a regular visitor I pass in the corridor. He claims that salt therapy has dramatically helped to alleviate his lung problems.

I've sensitive skin and often get eczema flare-ups on my hands and chest. To benefit from the treatment, your skin needs to be exposed to the salt air – something that was a little tricky to do for the eczema on my chest without exposing myself. Whilst my eczema flare up on my hands wasn’t as severe as it usually is, I did notice a reduction in redness after my first session. Though regular weekly sessions are recommended for best results.

The clinic has been open for just over a year and already counts 4,000 subscribers to the service. Proven benefits include a reduced need for inhalers and antibiotics for asthma sufferers – a symptom relief that could prove popular in the North West, which has one of the highest levels of asthma diagnosis in the UK, according to the British Lung Foundation. Zoltan also recommends the treatment for clearing your airways of pollution – something that, given the traffic pile-up I observed running down from the train station, wouldn’t go a miss in Liverpool.

The salt is said to remove pathogenic agents such as airborne pollen, as well as relax the immune system by reducing IgE anti body levels. However, engineer-turned-entrepreneur Zoltan is also realistic when it comes to the results.

“There are no miracles here. Salt therapy cannot rid you of a lifelong illness. But it has been scientifically proven to alleviate symptoms of respiratory conditions. It’s not magic, it’s science.”

Though the treatment is not directly endorsed on the NHS website, sufferers of long term conditions can apply for funding for salt therapy treatment via the NHS Continuing Health Fund thanks to a 2011 NHS trial that saw a COPD sufferer benefit from the treatment.

Salt has a reputation for being on the health industry’s blacklist, thanks to years of peddling the dangers of a salt-heavy diet. But, whilst it is in no way proof you should load up your plate with fast food, salt therapy does suggest that there are other benefits to be enjoyed from sodium chloride.

The Salt Cave in Liverpool is now offering a brand new £125 unlimited* monthly membership with the first session being completely free, enabling you to take full advantage of the powerful benefits of Salt Therapy as often as you like.